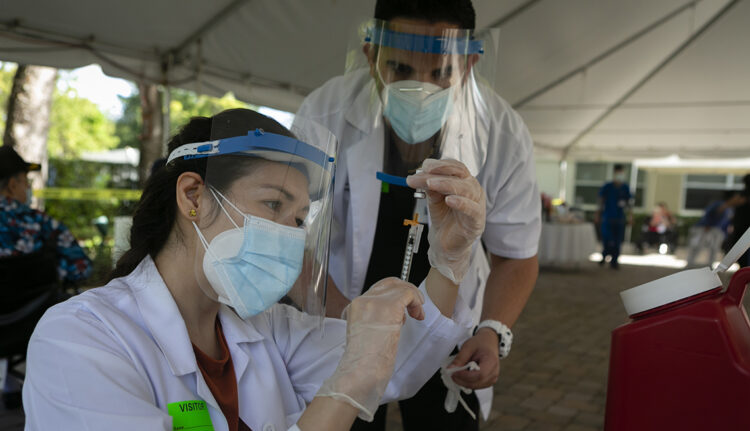 The U.S federal COVID-19 vaccine mandate  for health care workers was scheduled to start on Dec. 6 has been blocked by a federal judge.

The block  comes less than two weeks after the Occupational Safety and Health Administration suspended the Biden administration’s enforcement of the vaccine mandate for companies with 100 or more employees.

The mandate for health care workers had previously required health workers to get their first dose of the COVID-19 vaccine on Dec. 6 and the second dose by Jan. 4. The block means health workers can continue to work without vaccination in stark contrast with the Uk where vaccination has been mandated by the Britidh government with no legal challenge yet pursued along those lines.

If the principle of law applied by the U.S judge is valid, it would apply to the UK, although both countries have different laws, the principle of legitimacy is expected to be the same across the world, but with different perceptions by legal experts.

The reasoning behind the mandates is to protect vulnerable people from potential infection from health workers working in close proximity with patients, but critics of the mandate vaccine have often pointed to the fact that double vaccinated people can get infected and some have ended up being hospitalised by the virus.

In November, 10 states sued the Biden administration in response to the vaccine requirement for health workers. Arizona Attorney General Mark Brnovich, a Republican, requested a restraining order to block the federal vaccine mandate.

President Joe Biden is aiming to getting over 80 million more Americans vaccinated, in light of the high covid related eath rates in the U.S.

Announcing “a new plan to require more Americans to be vaccinated to combat those blocking public health,” Biden on Sept. 9 rolled out his administration’s Path Out of the Pandemic program, which aims to increase the vaccination rate by requiring shots across public and private sectors. Roughly 80 million Americans who are eligible for a COVID-19 vaccine have not been vaccinated.

Employers with 100 or more employees will be required to have their employees either be fully vaccinated or get tested weekly to come to work.

Biden said the Department of Labor’s Occupational Safety and Health Administration would implement the requirements that will affect 84 million workers. For now, OSHA has suspended this mandate after a federal appeals panel claimed the government agency exceeded its authority.

Federal workers and employees of contractors that do business with the federal government will be required to be vaccinated, though they won’t be penalized for not getting the vaccine until January 2022. Nov. 22 was the deadline for them to get the vaccine.

The Department of Health and Human Services announced its requirement for  vaccinations in Head Start programs, as well as schools run by the Department of Defense and the Bureau of Indian Education.

Workers in health care facilities that receive Medicare and Medicaid reimbursements, including hospitals and home health agencies, will also have to be fully vaccinated.
Individuals applying to become lawful permanent US residents must be fully vaccinated, US Citizenship and Immigration Services announced on Sept. 14.

The strategy also calls on state officials to make vaccinations mandatory for teachers and school staff. The U.S  president called on entertainment venues to require proof of vaccination or a negative test to enter their facilities. The administration is also upping fines for those who fail to wear masks on airplanes, trains and buses.

Angry  conservatives for Republican senators  are  nowopposing a stopgap funding bill to fund the government for the next few weeks, unless Democrats agree to not direct money towards enforcing a vaccine mandate for larger companies in the U.S.

Some Republican states have already proactively working to diminish mandates, by expanding unemployment benefits for employees who have been fired or quit over the requirement to get the vaccine.

On Wednesday, the House Freedom Caucus, a group of rightwing Republicans in the House of Representatives, urged their Senate colleagues to block the funding bill, “unless it prohibits funding – in all respects – for the vaccine mandates and enforcement thereof”.

In a letter to Mitch McConnell, the Senate minority leader, the Freedom Caucus said the Democratic-dominated House was set to vote in favor of the stopgap funding bill on Wednesday. The bill will then go to the Senate, where Democrats need Republican votes to pass the bill by Friday night.

Biden introduced vaccine mandates, which require employees to be vaccinated or submit to weekly testing, for federal workers and contractors in July. In September, Biden ordered healthcare workers to be vaccinated and companies with 100 workers or more to require Covid-19 vaccines or testing, which the government said would cover more than 100 million employees. Those measures have been put on hold by court rulings, after Republican state attorneys general, conservative groups and trade organizations have sued to stop the regulations.

The appeal by House Republicans came after Politico reported that some Republicans in the Senate were open to blocking the stopgap funding bill.

“I’m sure we would all like to simplify the process for resolving the [continuing resolution], but I can’t facilitate that without addressing the vaccine mandates,” Lee told Politico.

“Given that federal courts across the country have raised serious issues with these mandates, it’s not unreasonable for my Democratic colleagues to delay enforcement of the mandates for at least the length of the continuing resolution.”