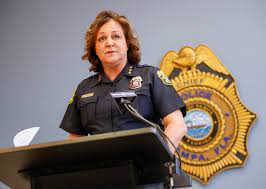 A top police chief in the U.S has been suspended. after being abusing their psoition of authorit y. Tampa Police Chief Mary O’Connor has been placed on administrative leave after body camera revealed she abused her power.

Footage taken from a traffic stop last month revealed she told a deputy she was “hoping that you’ll just let us go tonight” and flashed her badge, illegally escaping the same force of the law that would have applied to another person in her shoes.

Jane Castor, the Mayor of the City of Tampa, said Monday that she asked for and received O’Connor’s resignation after a review by the department’s internal affairs bureau found that O’Connor violated the department policies on “standard of conduct” and “abuse of position or identification.”

“The Tampa Police Department has a code of conduct that includes high standards for ethical and professional behaviour that apply to every member of our police force,” Castor said in a statement. “As the Chief of Police, you are not only to abide by and enforce those standards but to also lead by example. That clearly did not happen in this case.”

O’Connor was a passenger in a golf cart, which was pulled over for driving on a roadway without a license plate tag, according to footage of the November 12 incident obtained by CNN from the Pinellas County Sheriff’s Office.

The chief was riding with her spouse in a residential area in Oldsmar, Florida, but as the deputy explained why the couple was stopped, O’Connor asked if the deputy’s body camera was operating and then identified herself as the Tampa police chief.

“I’m hoping that you’ll just let us go tonight” O’Connor said before showing her badge to the deputy.

O’Connor apologized to the deputy and then gave him her business card. “If you ever need anything, call me. Seriously,” O’Connor said.

She and deputy thanked each other for their service and the couple was allowed to leave.

The revelation at an embarrassing cost for an otherwise professional and competent officer reveals the problem of excess power.

O’Connor apologized for the officer, when they were pulled over by a Hillsborough sheriff’s deputy. Mary O’Connor, known then as Mary Minter, repeatedly disrupted deputies who were trying to give Keith O’Connor a sobriety test, and she was asked to sit in a patrol car to calm down, according to published reports and personnel records, according to the incident in the city statement released Thursday.

“It was poor judgment on our part to be driving a golf cart on a public roadway without the appropriate tags,” O’Connor said. “This was the first time we had exited the golf-cart friendly community in which we own property with this vehicle, prompting the need for a license plate.”

“In hindsight, I realize how my handling of this matter could be viewed as inappropriate, but that was certainly not my intent. I knew my conversation was on video, and my motive was not to put the deputy in an uncomfortable position. I have personally called the Pinellas County Sheriff offering to pay for any potential citation,” she added.

Tampa Mayor Jane Castor stressed the core practise of accountability in his department.

“We hold everyone accountable, no matter their position, and this behaviour was unacceptable. Chief O’Connor will go through the due process and face appropriate discipline,” Tampa Mayor Jane Castor said in an accompanying statement Thursday.

On Friday, Mayor Castor announced O’Connor has been placed on administrative leave, pending the outcome of an investigation into the traffic stop. Assistant Chief Lee Bercaw will serve as acting police chief, Castor said.

The Tampa Bay Times revealed that it was not the first time her conduct had brought her profession to disrepute. She displayed bad conduct when  Hillsborough Sheriff pulled her and her husband three decades ago.

Mary O’Connor, known then as Mary Minter, repeatedly disrupted deputies who were trying to give Keith O’Connor a sobriety test, and she was asked to sit in a patrol car to calm down, according to published reports and personnel records.

There are several grounds for arguing that a dismissal should have followed that misdemeanour and she should have been promptly axed, but she was giving another chance that lasting decades without any major incidences that has come to light.

This was to be the last straw that broke the camel’s back. There was no coming back from this openly appalling conduct.