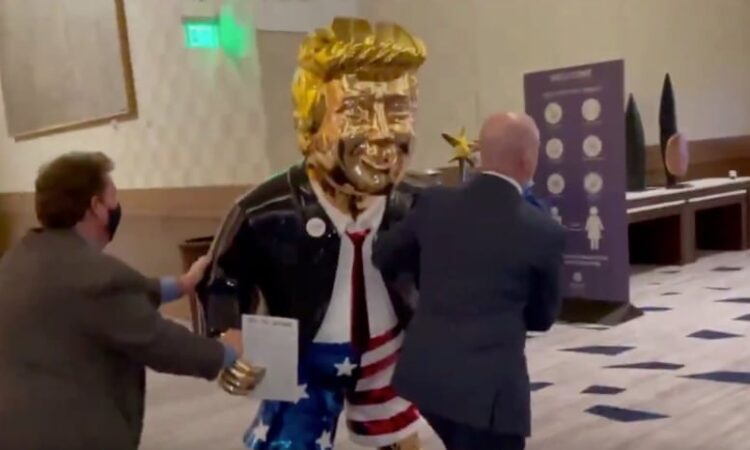 Donald Trump has been depicted  in the form of a golden statue unveiled at the Conservative Political Action Conference.

The annual conference described as the ‘largest and most influential gathering of conservatives in the world’ began on Thursday, February 25, in Orlando, Florida, and will run until Sunday.

A separate version of Trump  was spotted being wheeled down the halls of the Hyatt Regency, this one dressed in a shirt and tie, flip-flops and star-spangled boxer shorts.

Footage of the statue was shared online by Bloomberg reporter William Turton. Attendees in the background could be heard describing the gold figure as ‘awesome’ and ‘cool’.

In contrast, a number of social media users have criticised the creation of the statue, with one Twitter user writing: ‘There is a giant golden statue of Trump at CPAC because nothing says “I’m not in a cult” more like building a giant gold statue of your leader.’

Trump’s keynote address on Sunday will be his first speech since he departed from the White House last month. He is expected to continue to make false claims that the U.S 2020 election was stolen.

He was acquitted of inciting n insurrection at the Capitol Hill on January 6. Trump’s lawyers were outclassed by the brilliant pool of Democratic representatives during the impeachment trial.

Republicans argued that a former president cannot be tried for impeached after he left office.

However, several academics have said that the U.S Constitution  does not permit a president who commits a misconduct during the tenure of his office to escape accountability just because the misconduct occurred in the last days in his office.