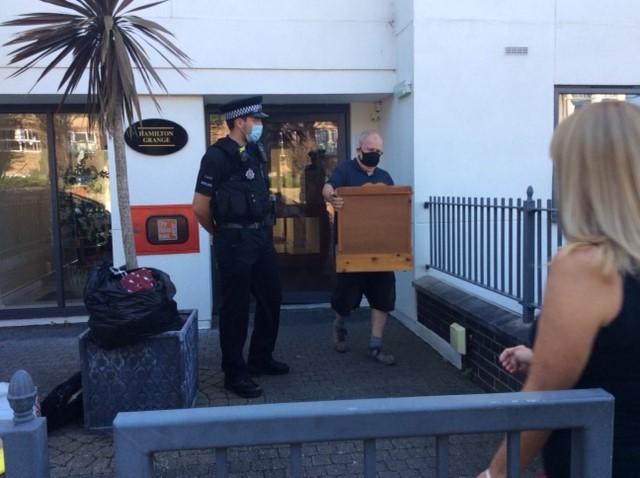 Social services cleared the property of a depressed alcoholic, hospitalised for over one week after a series of binging sessions.

Mr Hustwitt got so drunk that ambulance men were called to his home at Hainult Grange in Chalkwell, Essex, by concerned neighbours last June. He is currently at a hospital under the charge of medics and the supervision of social services.

A police officer was arranged to be on the scene, to prevent a friend of Gary ‘s from taking some of his belongings at the property. Police was contacted to intervene after it emerged mr.Hustwitt was too bed ridden to come to attend the property and determine which property belonged to his friend previously caring for him.

Gary Hustwitt, 60, was hospitalised following the contraction of an infection from an alcoholic binge. His flat has been empty for over two months, after being crippled by alcohol, despite an annual advance of £15,000 was paid for though his sister’s authority.  Mr Hustwitt’s flat was arranged for him after he was found in a degenerated state at his former property in Southend On Sea.

Mr. Hustwitt was fortunate to move into a property he was never going to occupy right to the end. The normal  requirements of a reference for landlords had been  bypassed by Appointmore who took Gary in following an arrangement with this organisation.

Mr Hustwitt who battled depression after his rich stockbroker father, John Stanley Hustwitt, froze him out of his  for disrespecting him when alive. His brother in law told The Eye Of Media.Com earlier this year that his father knew he would waste his inheritance on alcohol if given access to cash.

The alcoholic, whose addictgion is further complicated by the fact he suffers from bipolar,  had agreed to have carers look after him at least four times a week as part of a written arrangement to bypass the standard requirement of a reference to move into the property.

The property has 24 hour CCTV cameras and a buzzer, providing extra vetting for all attendants of the building at the Hainult Grange.

The former IT engineer  co-operated for a while before reneging on the agreement he signed to Social services was first alerted about his situation last December after an excessive drink binge. He abstained from alcohol for a week after a scare that he would be evicted shortly after.  The big time drinker on his day could see through five glasses of wine and up to ten cans of Polish beer, Kapache

Last Friday, Estate Agents appointmoore arranged for police and social services to remove all his stuff from the property which has been empty for about two months, but about which the estate agents will have no complaints after receiving a £15k annual advance for the property.

Two women and a young mail were seen emptying goods from the property early on Friday morning, assisted by a young mail. In the balcony of the property stood a second social worker, as she gazed into the streets while resting after a few rounds of carrying goods out.

A police officer stood at the entrance of the property,  after being assigned by both social services to guard the property from one of mr. Hustwitt’s friends who wanted to collect belongings he had left in one of the rooms.

The man, who also attended the property on the last day of the alcoholic’s tenancy, was refused by social services and the attending officer, to identify his belongings, against the advise of another police officer, PC Dunn, who had advised for an arrangement to be made with the male.

Second Social worker takes a breather on mr. Hustwitt’s balcony after rounds of clearing out belongings         Image:The eye of media.com

Neighbours expressed relief that mr. Hustwitt was never coming back to the property. They had complained constantly about a stench from the property arising from incessant drinking during certain periods, but which they claimed to have thought may have signalled he was dead. They also blamed estate agents Appointmoore for failing to ensure carers for Mr. Hustwitt, or permitting him to live there with them.

One neighbour said: ” Appointmoor kept telling us they did not know about his drinking problem, it is disappointing they allowed him to live here. He needs to be somewhere where a carer is there with him all the time. We have never had any problems with any other neighbours in the past.

The Hainult Grange – where he lived caught fire only last week after someone left a burning cigarette in the bushes. The fire was quenched by the ambulance service.

Mr. Hustwitt said he felt targeted by his neighbours, one of whom once threatened him on his doorstep over the smell coming from his property. He said he felt the others many of the others complaining about him were mentally ill.

Mr Hustwitt spent some time  during the lockdown conducting research while staying away from the drink and watching youtube videos about mindfulness and ufos.  He eventually descended into a  down spiral of uncontrollable drinking, defying the very agreement on which his tenancy was based.

Two stores from which he periodically ordered wine on line-deliveroo and Co-op were asked by this organisation to seize responding to his  online orders, and they obliged.

Neighbours were relentless in their demand for estate agents, Appointmoor,  to evict mr. Huswitt last Christmas and early in the new year. It was never forthcoming, although threatened. He had paid a heavy advance which not many estate agents would have wanted to forfeit.

Mr.Hustwitt accused the neighbours of being ridiculous and targeting him unfairly, stating on some occasions that the property looked like a hospital ward with mentally ill people residing there. He complained of receiving too many visits from police, and condemned the estate agents for taking £15k cash, yet had the shower to one of his bathrooms not function at all through out hi stay at the property.

In addition to complaints about foul odour coming from the flat, the neighbours constantly complained about music from mr.Hustwitt house, even when playing his guitar in an effort to beat his crippling depression. One neighbour once complained about a noisy washing machine from his flat which wasn’t working at the time, raising concerns some of the complaints were exaggerated.

It was only a matter of time before the drinking spiralled out of control, forcing him out of the property two months before his tenancy expired.

One good thing was that he kicked in a 20 fags a day habit  he had for years  when he moved into the property in which smoking was forbidden, and where there was a smoke alarm to detect any smoke coming from any of the flats.