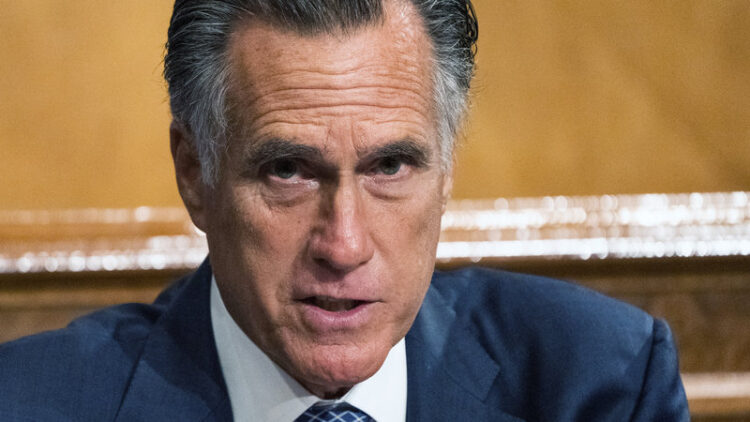 Mitt Romney, has issued out a strong statement highlighting a divided America as he condemned Donald Trump, stating  that his  attempt to pressure Georgia’s Secretary of State to falsify the electoral results was itself a heinous act that merited impeachment.

Trump was acquitted of inciting the riots at Capitol Hill, in the face of  overwhelmingly damning  evidence  against him, after his fellow Republicans got him off the hook by choosing not to protect him. Most Republicans were acting politically in their voting, protecting their future political ambitins=

However, the  former president faces  the prospect of several serious criminal and civil probes against him, and will be luckily to escape punishment for both.

In a comprehensive statement against  the former president, Romney said President Trump summoned his supporters to Washington on the very day of the electoral vote count, knowing that among the people he gathered were many who had committed violence in the past, and who had violent intent.

He said that despite the obvious and well-known threat of violence, ”Trump incited and directed thousands to descend upon the seat of Congress as it was undertaking the constitutionally prescribed process to certify his successor. And then he not only failed to defend the Vice President and the others at the Capitol who he saw were in mortal danger, he also incited further violence against the Vice President”.

Re-iterating numerous pronouncements against Trump, he said the former President’s conduct represented an unprecedented violation of his oath of office and of the public trust.

Romney’s statement,  entered into the Congressional Record, was detailed and outright scathing of the former U.S president.

His statement began: “I believe it is up to every Senator to determine what to consider and what the Constitution and their conscience require of them. The conclusion I reached on the final verdict will not surprise anyone who read my reasoning in the first impeachment trial: I consider an attempt to corrupt an election to keep oneself in power one of the most reprehensible acts that can be taken by a sitting president,” wrote Romney. “The second impeachment resulted from the President’s continued effort to do just that.”

”There is a thin line that separates our democratic republic from an autocracy: it is a free and fair election and the peaceful transfer of power that follows it. President Trump attempted to breach that line, again. What he attempted is what was most feared by the Founders. It is the reason they invested Congress with the power to impeach.

Accordingly, I voted to convict President Trump”, he said.

do as he did without suffering meaningful consequence.

‘America is divided as never before in modern history. So, too, is the observation that this division is the product of a decline in trust in our governing institutions, of a decline in the social bonds forged in churches and charities and communities, of expanding income inequality, and of trusted news sources replaced by cable and internet algorithms calculated to inflame our prejudices.

‘Less unanimous are the predictions of where this division will lead. Even so, no one suggests that it will lead to a better future. Some envision an economy buffeted by policies drafted by the extreme wings of the political parties. Others claim that authoritarianism will replace democracy. Some anticipate social unrest and violence.

A few even predict civil war. Still others fear that a weakened America will become vulnerable to an opportunistic foreign foe.

‘We instinctively know that the growing division represents a growing danger. Academics and pundits may promote cures, but in our hearts, we know that their bromides won’t heal the rift: People aren’t going to return to mainstream media, churches aren’t going to experience a resurgence, and income inequality will remain a persistent feature of the global digital economy.

Throughout history, only one thing has been able to unite a divided nation: great leaders—leaders like Churchill who inspired a fearful nation; leaders like Lincoln who mustered the national will to save the Union; and leaders like Reagan who raised our spirits from suffocating malaise.

Leaders like these also have been essential in our churches and universities and businesses and charities, and just as importantly, in our homes.

With our nation so divided, so vulnerable to economic distress or to civil violence or even to foreign adversaries, the need for leadership that unites and uplifts, that calls on our better angels, is as great as we have ever known. The corollary is that the failure of leaders to unite, to speak truth, to place duty above self, is as dangerous as we have ever known.

With the country as divided as it assuredly is, a person in a position of leadership who inflames passions with the purpose of perpetuating untruth commits a singularly dangerous sin against the Republic.

We Senator-jurors did not all vote in the same way in this impeachment trial. Differences in perception of the facts that were presented are to be expected. So, too, are the differences in our respective estimations of the impact of the outcome of the trial. People of conscience reached different conclusions. National unity does not require unanimity of opinion.

But civic unity does require truth. There is one untruth that divides the nation today like none other: it is that the election was stolen, that there was a massive conspiracy, more secret and widespread than any in human history, so brilliant in execution that no evidence can be found of it and no observer among the tens of thousands in our intelligence agencies will speak of it’.