An estimated quarter of a million people queued up for 17 hours to see the Queen’s coffin as it lay in state at Westminster Hall.

The figures were revealed by UK culture secretary, Michelle Donnelan after the nation’s longest-reigning monarch was buried at Windsor Castle on Monday

The Queen was buried in a private ceremony in Windsor on Monday evening, following a state funeral in London and military procession to Windsor Castle. An extra week of mourning will be observed by the royal family.

According to Donelan, her department estimates the figure to be at about 250,000. Queues to see the queen’s coffin stretched across many miles in London on Monday, in which the whole of the UK was granted a bank holiday.

Queen Elizabeth’s funeral was attended by over 500 dignitaries from around the world, making it one of the most attended of its kind in recent years. The British public attended en Masse to pay their respects to the queen.

Media interest accompanied the attendance of Prince Harry and Meghan Markle, because of the longstanding tension between the Sussexes and The Cambridges, and the rest of the royal family. The death of the Queen had brought the entire family together in her honour, but unresolved issues continue to blight a relationship their late mother would have loved to blossom.

There appeared to be no eye contact or acknowledgment between Prince William and Prince Harry as they walked behind the Queen’s coffin. Prince Harry looked straight ahead during the procession from Westminster Hall to the abbey, and later at Windsor Castle. 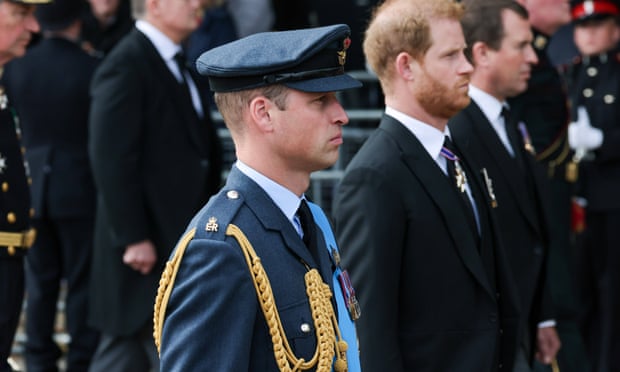 The two men and their spouses eyes never met. Deep wounds don’t heal overnight, and media coverage about the relationship strains between the two brothers don’t help the chances of the brothers to address and resolve their deep-seated issues through discussion and understanding. Relationship breakdowns in families is nothing new, when it festers for too long, it becomes too sour and in need for intervention.

Many factors would have made for the inevitable tension, not least of all the fact Prince Harry and Meghan learnt that they had been uninvited from a state reception at Buckingham Palace by reading about it in the press. Apparently, the invitation was withdrawn because the reception is going to be limited to “working members of the royal family only”.

The royal family hold discretion over who attended the state reception was that of the royal family, but it is not yet known why the Sussexes were not infomed about this,Walking behind King Charles III, the Princess Royal, Prince Edward and the Duke of York, who were side by side.

As the coffin was taken into the abbey, Harry and Andrew, who also stepped back from public life after his interview on the BBC’s Newsnight about his friendship with the paedophile Jeffrey Epstein, looked at the ground as other members of the family in military uniform saluted.

Criticism in response to shows of affection at events commemorating the late Queen has also sparked concerns.

The Duchess of Sussex wore a pair of pearl and diamond studs gi ven to her by the Queen, which she had worn on her first joint engagement with her in June 2018, when they marked the opening of a new bridge in Cheshire, was visibly emotional at times.

On arrival at St George’s chapel for the service of committal, William, Kate and their children waited at the head of the front pew to allow Harry and Meghan to pass by, before taking their own places. The absence of an acknowledgement between the pair during that moment was conspicuous.

The royal family is observing another week of mourning for the Queen after a state funeral on Monday, with the ceremony and procession having been watched by millions of people around the world.

“You saw so many thousands out there and I don’t think anybody can suggest that our late monarch didn’t deserve that send-off, given the duty and the selfless service that she committed to over 70 years.” She added that it would be “downright preposterous” to suggest otherwise.

“It was great sense of the community coming together. I always think of our late monarch as the glue that brought society together,” she added.

Donelan described the queue for Westminster Hall as “phenomenal”, as she paid tribute to the volunteers who helped manage and support the proceedings of recent days, including the lying in state.

Today, British flags on British government buildings around the world are flying at full-mast once again, as the period of national mourning following the death of Queen Elizabeth II draws to a close.

The Queen was buried in a private ceremony in Windsor on Monday evening, following a state funeral in London and military procession to Windsor Castle.

But the Royal Family will continue to observe another week of mourning.

Senior royals are not expected to carry out any public duties during this time.

Flags at royal residences will remain at half-mast until 08:00 BST on 27 September – the day after their mourning period ends.

An intensive clean-up operation is under way after hundreds of thousands of people across the UK flocked to London to watch the Queen’s funeral.

Council workers wearing black ribbons and bows were deployed on Monday evening to pick up litter and remove sand on roads around Westminster.

Cleaners at Southwark Council in south London worked an extra 24 hours over the time mourners queued to visit the Queen lying-in-state – removing seven tonnes of rubbish in the process. 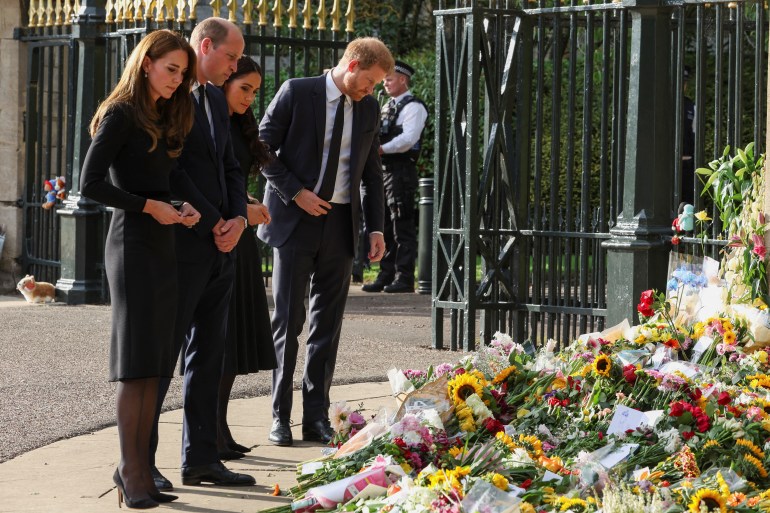 On Monday, world leaders and foreign royalty joined a 2,000-strong congregation at Westminster Abbey for the funeral, where the Dean of Westminster paid tribute to her “lifelong sense of duty”.

Archbishop of Canterbury Justin Welby spoke of the affection so many people felt for the late monarch. “Few leaders receive the outpouring of love we have seen,” he added.

About 100 presidents and heads of government were in the abbey – including US President Joe Biden, French President Emmanuel Macron, New Zealand Prime Minister Jacinda Ardern, and Canadian PM Justin Trudeau.

Royal families from around the globe also attended – with kings, queens and emperors from Denmark, Spain, Sweden, Norway, Belgium, the Netherlands, Japan, Malaysia and Jordan present.