Protesters in Australia have set fire to the national flag and called to ‘abolish the monarchy’ hours after the national memorial service was held to mourn the Queen.

Thousands of protesters rallied against colonialism in an effort to draw attention to First Nation people’s suffering.  Protests were held in Sydney, Brisbane, Melbourne and Canberra. Protesters took the opportunity to protest about racism across a broad range of areas where there has been a strong agitation of racism in Australia.

Protesters complained about black people dying in custody over the years, in a wide demonstration that would be considered an insult to those observing an extra week of mourning.

In Sydney, dozens of people came together near a statue of Queen Victoria in the city centre before marching through the streets.

“I think the monarchy needs to be aware that there’s unfinished business happening here in Australia,” said Gwenda Stanley, a 49-year-old activist of the Indigenous Gomeroi people.

“The monarch is nothing to mourn about, it is something, if anything for our people to rejoice,” she said, calling for the return of Indigenous lands and restitution for “war crimes”.

“The monarchy needs to be abolished, it should have been many years ago,” 24-year-old Indigenous activist Paul Silva.

“First Nations people within Australia are still fighting for their traditional lands,” he added.

“We demand that they return those lands to the traditional owners.”

The sentiments expressed by the activists claiming the demise of the monarch to be something to rejoice about is an expression of the split perspectives from which Queen Elizabeth’s passing is seen by different groups of people.   Despite the fight for traditional lands, any expression of joy for someone’s death is insensitive and unkind.

The issues raised by those groups of people are worthy of attention but will equally receive little sympathy by those who would otherwise be united with those seeking solutions to historical issues that have long been a source of division.

At a national memorial service for the queen in Canberra, Australia’s Governor-General David Hurley, who represents the monarchy, said he recognised the concerns of the island continent’s first inhabitants.

“Considering the unifying role her majesty played, I acknowledge that her passing has prompted different reactions for some in our community,” Hurley said.

Signs and banners held at the protests across the country called for a range of reforms including the introduction of an Indigenous treaty, Australia to become a republic and for justice in response to reports of First Nations deaths in custody.

“I’m conscious and respect that the response of many First Nations Australians is shaped by our colonial history and broader reconciliation journey. That is a journey we as a nation must complete.”

Australia’s Prime Minister Anthony Albanese has promised a referendum in his first three-year term to give Indigenous peoples the right to be consulted by lawmakers on matters that affect them, a so-called Voice to Parliament. 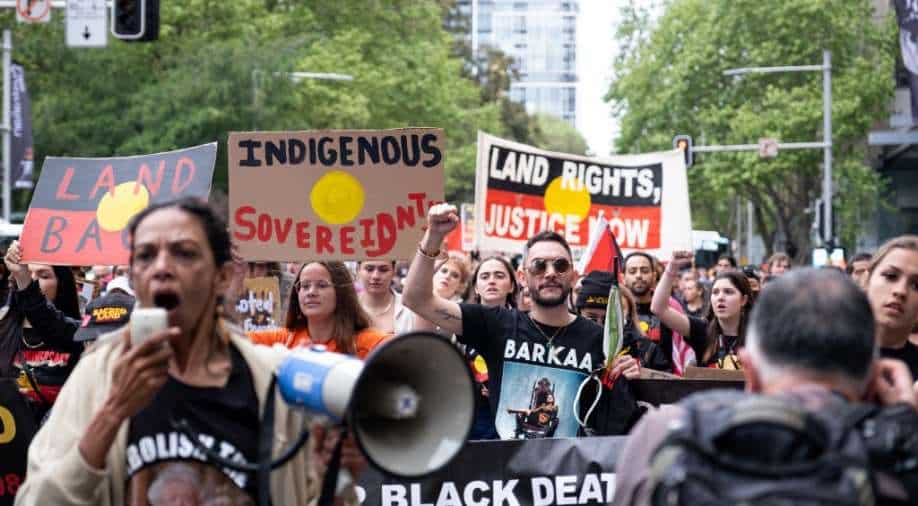 Indigenous communities seek a break from the colonial past Photograph:( AFP )

Albanese has made the Voice to Parliament his priority, rejecting questions about a push for an Australian republic as inappropriate during a period of mourning.

The arrival of British settlers in 1788 signalled the start of two centuries of discrimination and oppression of Indigenous Australians who have inhabited the land for an estimated 65,000 years.

The demonstrations at Melbourne’s Birrarung Marr cut up the flag, while elders in Brisbane set the Australian flag on fire on top of a pile of flaming newspapers.

‘The Crown has blood on their hands. Our people are still dying in this country every single day,’ Ms Thorpe said at the rally. The Crown’s boot is on our neck and we’re sick of it.’

The group then smeared red dye, resembling blood, over an emblem on the British Consulate in Melbourne. Greens Senator Lidia Thorpe roused a large crowd of activists in Melbourne with an impassioned speech and ‘bloodstained’ hand

Activist groups Warriors of the Aboriginal Resistance (WAR) and Fighting In Solidarity Towards Treaties were one group who organised the demonstrations.

‘This is a stance against the continued crimes committed against marginalised First Nations, black, brown and Asian communities. We do not support benefactors or Stolenwealth (sic) and demand justice, truth and accountability for all. Justice for all,’ WAR wrote on Facebook.

‘This is a demonstration against racist colonial imperialism.’This is a stance against the continued crimes committed against marginalised First Nations, black, brown and Asian communities. We do not support benefactors or ‘Stolenwealth’ (a portmanteau of stole and commonwealth) and demand justice, truth and accountability for all. Justice for all,” WAR wrote on Facebook.