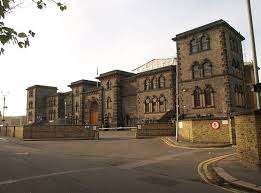 Prison security will be boosted by a £100 million investment as part of a crackdown on crime behind bars, the British  government announced today.
The  cash injection will target all types of crime in prison; from drug smugglers fuelling a rise in violence and self-harm, to gang kingpins continuing to run their operations from jail, to offenders seeking to contact their victims in the outside world.

The grand plan to combat criminal conduct in Uk prisons  includes  tough airport-style security, including X-ray scanners and metal detectors,  all of which  will  be put into prisons across the estate to clamp down on the drugs, weapons and mobile phones that increase the risk to our officers and hinder rehabilitation.  The prime minister’s office working alongside the Ministry Of Justice  said that cutting-edge technology to detect and block mobile phones will be brought in to better identify and stop those who seek to organise drug supply or harass victims from the prison wings. As well as tackling corruption, the new technology will improve intelligence analysis and strengthen the Counter Corruption Unit that roots out the small minority of dishonest staff and the criminals who seek to manipulate them.

Jail , which is meant to be a destination for criminals and law breakers has become a base for further criminal activities, bullying, and wayward behaviour.  In combination with the 4,700 additional officers who have been recruited since late 2016, this investment can have a major impact on crime behind bars. Without phones and access to drugs, criminal networks will be severely hindered, prison officers will be protected, and ultimately the public will be safer.

Prime Minister Boris Johnson said:
”We cannot allow our prisons to become factories for making bad people worse.
We will stop the drugs, weapons and the mobile phones coming in, so we can safeguard victims, protect staff, cut violence and make our prisons properly equipped to reform and rehabilitate.The public must see justice being done, punishment being served and feel protected.

”There is a direct link between crime on the wings and crime on our streets – it can no longer be assumed that prison walls are enough to stop organised criminals from continuing their operations.
This funding will have a transformative effect on prisons and give our hard-working officers the advantage as they tackle this scourge head-on.
By disrupting those who continue to offend behind bars, we can keep our staff and other prisoners safe, and make sure that prisons truly fulfil their purpose of protecting the public.

All prisons across the estate will benefit from the measures, with airport-style security being concentrated in the closed estate.
The new security funding comes days after the Prime Minister announced a programme of up to £2.5 billion to create 10,000 additional prison places.

The £100 million is the latest in a series of significant investments to increase security and stability in prisons, including £70 million announced previously. The £70 million funded new security measures such as improved search teams, a digital categorisation tool to better manage offenders’ risk, and improvements to the physical security and safety of the prison estate. Further funding has been made in previous years to build intelligence capabilities, a Financial Investigations Unit and a Serious and Organised Crime Task Force.
This has come against a backdrop of rising prison officer numbers, with more than 4,700 now recruited since October 2016 and staffing levels at their highest since 2012”.