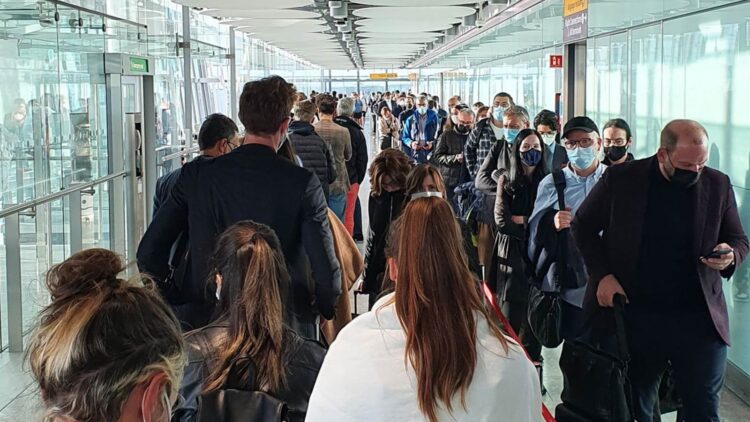 Airline passengers  have reported delays of up to four hours as airports across the UK were hit by a second e-gate technical fault within two weeks.  Travellers arriving at Heathrow were forced to either wait in long queues in terminals or remain on aircraft.

The Home Office said the latest problem was caused by a “technical issue”.

“I think I’ll stay home next time… and stick to Zoom calls.”

Another passenger, Thomas de Lucy, tweeted: “Not only are we waiting for two hours at passport control but Heathrow staff are all incredibly rude, shouting at people and ignoring others.

“Maybe a supervisor should be on hand to control staff behaviour.”

It comes less than a fortnight after e-gates failed at airports across the UK.

All 270 e-gates across the country at the 15 air and rail ports where they are deployed were down for about two hours on September 24 before links were restored.

Home Office officials said security at the border was not affected but declined to explain the cause of the technology crash.

A Heathrow spokeswoman said: “Earlier today a systems failure impacted the e-gates, which are staffed and operated by Border Force.

“This issue, which impacted a number of ports of entry, has since been resolved and the e-gates at Heathrow are back up and running again.

“Our teams remain on hand and are working with Border Force to monitor the situation, and to get passengers on their way as quickly as possible.”

A Home Office spokeswoman said: “This morning a technical issue affected e-gates at a number of ports. The issue was quickly identified and has now been resolved.

“We have been working hard to minimise disruption and continue to monitor the situation closely.

“We apologise to all passengers for the inconvenience caused.”