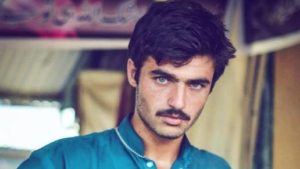 An 18 years old Pakistani man‘Chaiwala’ Arshad Khan has signed a modeling contract after a photo of him selling tea at a market in Pakistan went viral.

Arshad Khan a Pakistani man was approached by a few girls at the Sunday Bizarre market who found him attractive and decided to take some selfies with him.  As soon as the selfie was shared online, it astonishingly went viral in Pakistan, making it one of the high trending social media topics by Monday.
A regular listener to our eye of destiny radio from Pakistan contacted our admin to bring this story to our attention as it hardly been reported in England.

Pakistani Photographer Jiah Ali took the snap below, showing Arshad Khan at the Itwar Bazar market. It wasn’t long before the hashtag #chaiwala (meaning tea seller) started to spread across the internet as thousands of people swooned over his “dreamy” eyes.

Thanks to all the online attention, the 18-year-old was snapped up by online clothing retailer Fitin.pk.
”Chaiwala is no more,” the brand states on its website. “Now he is fashion wala”. Khan told Samaaa TV he has also received numerous acting offers, along with a lot of female attention.
Apparently “30 to 40 girls” came to take a selfie with Arshad Khan at the Pakistani market within hours of his photo being posted on Instagram, as his fame spread even further afield. in Pakistan.

Chaiwala Arshad Khan is said to be one of 18 siblings,who has been selling tea at the weekly market for the past four years.

Writing on her Facebook page, the photographer behind his rise to fame said Arshad Khan was “very happy” about his newfound fame.
“People have been asking about his reaction, he’s very confused right now and is overwhelmed with all the attention,” Ali Wrote.
“He’s confused, scared and happy all at the same time. He doesn’t mind being called a ‘chaiwala’, and yes he is getting a lot of offers!”
Spread the news
2
2
Shares