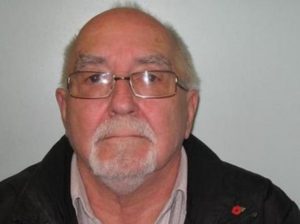 The stories of Paedophile’s abusing children are always very sickening to hear.

Sick human beings who take away the innocence from children to gratify their own strange and depraved sexual desires are a horror to the human race.

On Friday, a Paedophile who was once a former British Legion volunteer and sexually abused children in foster care during a 20-year rampage, was jailed over the weekend.

Paedophile Roy Darvill, from Walthamstow, was sentenced to 16 years behind bars at Snaresbrook Crown Court. The 79-year old big time pervert, had previously admitted one count of rape and 29 indecent assaults on five girls, the youngest being just two years old.

Darvill’s evil reign of terror against his victims spanned two decades, from 1975 until 1995.His homeless son, 49 year old Darren Darvill was given a two-year suspended sentence after he was found guilty of assaulting one of the girls.
Justice against Darvill began in November 2013, after a woman attended an east London police station and disclosed she had been sexually abused by Roy and Darren Darvill when she was a child.

Police investigating the case identified and traced four other women, all of whom made allegations against Roy Darvill. All of the victims had all been abused at a home Darvill owned in Walthamstow- between 1975 and 1995 whilst under his foster care.

At the time of his initial arrest in December 2013, Darvill had been serving as club secretary of the Royal British Legion’s Leyton branch. He was subsequently charged in March 2016. His son Darren pleaded not guilty to charges and was subsequently found guilty of two counts of indecent assault, which took place at the family home between 1984 and 1988.
DC Colleen Ryan, of the Met’s Sexual Offences, Exploitation and Child Abuse Command, said:

“Roy Darvill preyed on the most vulnerable of children and abused his position of trust in the most horrific way imaginable.

“The victims had been placed into his care where they should have been afforded the security and love every child deserves.
“Instead they were subjected to systematic sexual abuse.
“One of those victims was also abused by Roy’s son, Darren. The effect this abuse has had on the victims’ adult lives should not be underestimated.

“Hopefully this conviction will send out a strong message that no matter the passage of time, police will conduct a thorough investigation and make every effort to bring perpetrators to justice.”