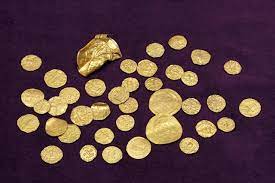 Norfolk  has been named the best place in the country to hunt for buried treasure, according to new figures.

The region took the top spot for treasure discoveries, according to provisional figures from the Department for Digital, Culture, Media and Sport (DCMS), with some 249 finds made last year.

Norfolk was the top county in which to seek out treasure, with 104 treasure discoveries, while Essex clocked up 51.

Lincolnshire was also named a hotspot for treasure discoveries as 47 finds were made in 2020.

Among the discoveries to have come to light recently was the largest-ever hoard of Anglo-Saxon gold coins ever discovered in England.

The 1,400-year-old hoard – comprising 131 gold coins and four other objects – were discovered in a west Norfolk field, though their finders’ identity has been protected.

Overall in 2020, there were 1,077 discoveries in England, Wales and Northern Ireland last year, making it the seventh year in a row that the number of treasure finds topped 1,000.

A breakdown of the types of objects found in 2020 is not yet available.

Among the discoveries in Norfolk were 1,060 objects dating from a range of periods including the Bronze Age, the Iron Age, medieval and the 18th-21st centuries.

These were described as “object cases”, meaning they are non-coin finds. There were also 243 coin cases among the treasures reported in 2019.

Norwich Castle Museum obtained 15 finds — the second-largest museum acquisition in the UK and 12pc of all objects found in the county.

One of the recent finds was a gilded silver heart, arrows pendant and a gold ornament. Found near Reepham, the objects date from the Bronze Age and the post-medieval era.

Between 2014 and 2020, 151 gold medieval coins were also found near King’s Lynn. It is thought to be the largest hoard discovered in Britain. The coins were made in Europe between 570 and 630.

Museums also managed to bolster their collections as 352 discoveries were either acquired or donated to them.

The DCMS figures show the number of reported treasure finds for 2019 and provisional figures for 2020 within England, Wales and Northern Ireland.

The Treasure Act allows for a reward up to the market value of the treasure to be shared among the finder and the tenants and/or owner of the land on which the treasure was found. The amount of the reward and how it is divided among the claimants is determined by the Treasure Valuation Committee.

Only if a museum expresses no interest in the item, or is unable to purchase it, can the finder retain it.