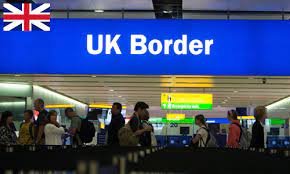 The UK has seen the highest net migration since the end of the Second World War.

An estimated 504,000 more people came to the UK than left last year, a figure greater than the population of Liverpool.

The figures are the worst of all the G7 nations, showing a broad incapability of the Uk government to keep a lid on growing immigration numbers out of control.

Office for National Statistics data shows that in total more than a million people arrived in the country last year. The report also said an estimated 35,000 people arrived across the English Channel in small boats in the year ending in June 2022.

It means net migration – the number of immigrants to the UK, less the number of people leaving the country to move elsewhere – has more than doubled in the last year, adding to the pressure on Rishi Sunak and Home Secretary Suella Braverman over their stated aim of reducing the figure.

The Office for National Statistics (ONS), which compiles the provisional figures, said 2022 was a “unique” and “unprecedented” year following the worst of the Covid pandemic, the transition to the Government’s new points-based immigration system and the resettling of tens of thousands of Ukrainian and other refugees to the UK amid conflicts.

According to the ONS the bulk of the increase was driven by students arriving to study. A total of 487,000 student visa were issued in the year to June 2022, an increase of 71%.

The number of people granted asylum in the UK in the year to June 2022 was 24% lower than in 2019, despite there having been a 77% increase in applications.

A total of 63,089 applications for asylum were made – the highest since 2003 and 75% higher than during the peak of the European Migration Crisis in 2016.

The numbers were also bolstered by people fleeing the war in Ukraine with more than 170,000 visas issued to Ukrainian nationals.

During the same period a total of 45,000 British nationals left the UK.

Jay Lindop, Director of the Centre for International Migration, Office for National Statistics said: “A series of world events have impacted international migration patterns in the 12 months to June 2022.

“Taken together these were unprecedented. These include the end of lockdown restrictions in the UK, the first full period following transition from the EU, the war in Ukraine, the resettlement of Afghans and the new visa route for Hong Kong British nationals (Overseas), which have all contributed to the record levels of long-term immigration we have seen.