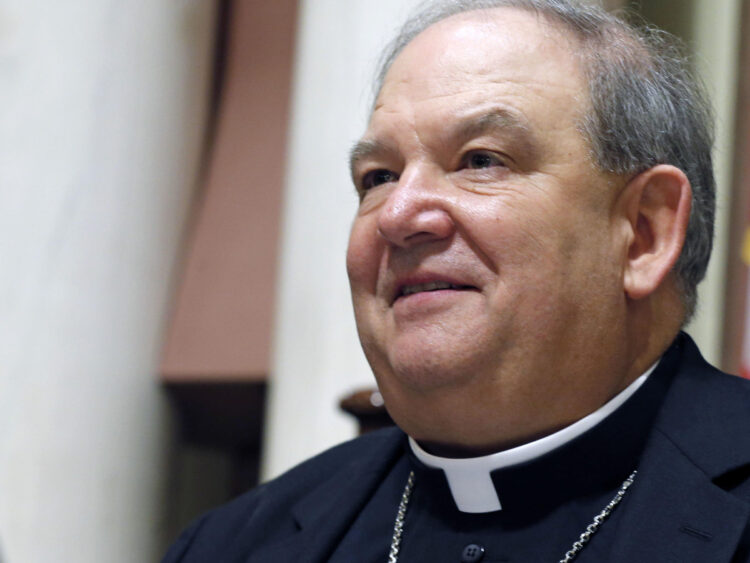 Their joint letter, signed by the archbishop Reverend Bemard A. Hebda
Archbishop of Saint Paul(pictured) and Minneapolis and several bishops,  the Catholic leaders said they were “especially disappointed” that Walz’s orders don’t address “both the vital importance that faith plays in the lives of Americans, especially in this time of pandemic, and the fundamental religious freedom possessed by houses of worship that allows our country to thrive.

In their letter they say, ”it concerns us that we are still without a clear road map, or definite timeline from your administration about a phased re-opening’.  Executive order seems to have taken a step backward, imposing an explicit prohibition on faith-based gatherings where none had existed”.

Lutheran leaders have separately expressed disappointment in the ongoing prohibition of church gatherings: “We were disappointed to find that instead, you allowed retail and other non-critical businesses to open, setting a plan in place for bars and restaurants to reopen while limiting churches to meetings of ten people or fewer. In the absence of a timeline or any other assurances that churches will soon be able to reopen, we find that we must move forward with our religious exercise in a safe manner.”

Challenging
In response to the letters, Teddy Tschann, spokesperson for Walz, released the following statement:

“As the Governor has said, this is a challenging situation for him personally and a challenging situation for him as a public official charged with protecting the health and safety of Minnesotans. He remains in routine communication with faith leader across the state and understands the toll this pandemic is taking on the spiritual health of Minnesotans. Governor Walz and the Minnesota Department of Health will be meeting with the Archdiocese this week.”

The restrictions were started in March to slow the spread of the deadly coronavirus. So far, the pandemic’s death toll has reached 777 in Minnesota. There are 17,670 laboratory-confirmed cases statewide.

Walz has announced plans to allow up to 50 people to gather and dine in restaurants outside from June 1, but refuses to permit the worship limitation from 10, inside or out.

State health officials emphasise  the unpredictability of allowing churches to open  because of the usual proximity  of people and the duration of such exposure in religious gatherings.

Walz specifically noted that several outbreaks have been tied to choir singing, although. Some governors in America have suggested allowing churches to reopen but without singing because of the view that full-throated singing can expel droplets containing the  Covid-19 virus.

Precautions-
The Catholic leaders said they will take precautions to prevent the spread of COVID-19 while allowing parishes to decide on their own whether to resume Mass.

The bishops said they believe they can safely resume services and follow “strict protocols … for sanitation and social distancing,and will have to limit attendance to one-third of the seating capacity of the church,” noting that the proposed protocols are based on the work of national medical experts and theologians and are also being followed by other dioceses in the country.

The Catholic leaders propose different laws for different churches in cases of churches that can’t meet the extensive and stringent diocesan protocols.

It might mean that some churches stick with the cap of 10 people, that some don’t resume services at all, and that depending on how the pandemic continues, those that resume, might later cease doing so, the letter said.

The bishops said “the obligation of a Catholic to attend Sunday Mass remains suspended and we have uniformly encouraged those most at risk to stay home,” noting that they are still asking parishes to continue to livestream services.

Religious Liberty
In a separate call for churches to be opened, the Becket Fund for Religious Liberty sent a letter to Walz and Minnesota Attorney General Keith Ellison , accusing the state of violating the First Amendment by not allowing the churches to resume regular services.

“Governor Walz’s latest re-opening order allows the Mall of America to open its doors to those seeking retail therapy but disallows churches from providing spiritual healing to their congregations,” said the Becket Fund, noting that the two churches are legally represented by the law firm Sidley Austin LLP in this assertion.