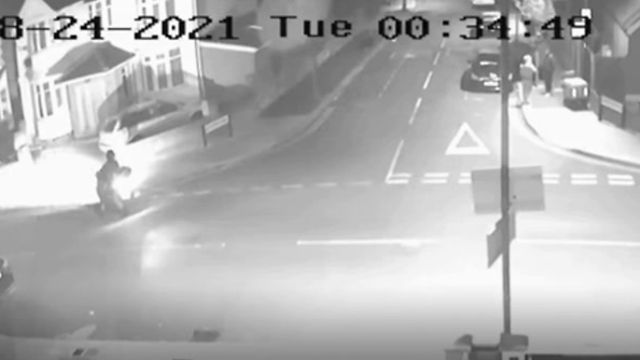 The Met Police have released footage showing the moment two people were shot at in Neasden. The incident left a 21-year-old man with life-changing injuries after sustaining gunshot injuries to his back, hand and hip.

It occurred at 12.35 am on August 24 to Cairnfield Avenue. whilst the victim was speaking to a friend in the street when the suspect approached on a moped.

Neasden and the neighbouring area of Harlesden is notorious for rival gangs and drug dealing, but there is insufficient information to state what the motive of this attack was.

A local from the area who insisted on anonymity told The Eye Of Media.Com:  ”this definitely sounds drugs related because guys on mopeds who carry guns are usually drug dealers.  It  doesn’t sound like a contract killing because if it was the shooter would have had a balaclava on to hide his face. It sounds like he saw the two men by chance, and recognised them as people he had beef with. It doesn’t mean the victim were drug dealers, it suggests they may know drug dealers or may have got verbally involved with in terms of conversations about an issue connected with this.

A lot of drug dealers in the area rob other drug dealers, and ,many people get involved in chat about that. Sometimes people would say this drug dealer deserved to get robbed because he robs others, or he tries to get other people’s girlfriends. Chat like that is common round here, and it leads to drama sometimes. Talk will already be going round about who did the shooting, but not many people will snitch round here, unless they are very close to the victim”.

Cops are still investigating the shooting which claimed none of the lives of the two men targeted,  though murder is believed to have been the aim of the man.

The Met Police told The Eye Of Media.Com that the man who escaped was around the same(21) as the injured victim, adding that ” it is impossible to say how the other man escaped uninjured”.

CCTV footage captured the suspect driving into the road from Neasden Lane and circling around before pulling to a stop a few metres away and switching off his lights. The two men turned to look at the suspect but were at the time unalarmed by his presence, until the suspect  pulled out a firearm without warning and shot the pair.

The victim who was hit immediately dived behind a car to take cover, while his friend  desperately ran away.’

The rider fires a number of shots before calmly driving away back in the direction of Neasden Lane.

Armed officers responded immediately but the suspect had by then disappeared and was not found.

A crime scene was established and a number of bullet casings were recovered.

The suspect was wearing a dark helmet and dark clothing, but his features are not very clear to see.

Detective Constable Oliver Kotis, Specialist Crime, said: “I would urge anyone who lives in the area to check doorbell and dashcam footage to see if they might have captured this person in the area.

“But for sheer luck we could have had two people shot dead in the street; this could have been a double murder investigation.

“The suspect is a dangerous offender who has access to a firearm and we have seen that they are prepared to use it.

“It is vital that we catch them.”