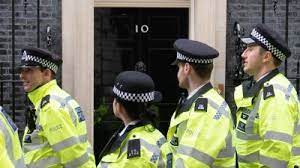 The Metropolitan Police have issued more than 50 new fines for breaches of Covid rules in Downing Street and other government buildings.

The prime minister and his wife are not amongst those fined on this occasion.

The latest penalties are thought to involve a Christmas party in December 2020, which Mr Johnson did not attend.

No 10 has promised to reveal any further fines imposed on the prime minister.

The Met have been investigating 12 gatherings, at least three of which Mr Johnson is known to have attended.

As he arrived for a special cabinet meeting taking place at a pottery in Staffordshire, the prime minister was asked whether he was “shocked” at the scale of law-breaking in No 10.

“We’ll have plenty to say about that when the thing’s finished,” he replied.

In a statement, the Met said the investigation “remains live”. Further fines are expected to follow, but no timescale has been given.

The fines continue to expose the sheer hypocrisy displayed at the heart of government at a time when  millions of people were forced to abide by rules devised in Downing Street, which divided families and prevented many from seeing their loved ones up until the point of death.

The scale of the rule breaches has also questioned the extent to which the Uk government believed the virus of Covid 19 was as serious as they proclaimed it was.
Senior civil servant Sue Gray and the House of Commons privileges committee are also running inquiries into what has become widely known as Partygate.

Opposition parties have called for Mr Johnson and Mr Sunak to resign, but Labour leader Sir Keir Starmer has also been caught up in alleged double standards after he was filmed drinking beer in City of Durham MP Mary Foy’s constituency office during coronavirus restrictions in April last year.

Supporters of the prime minister have emphasised that Boris Johnson will not be resigning, given the important role of leadership the war in Ukraine commands of a national prime minister.