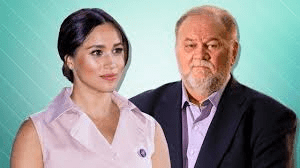 Meghan Markle’s father’s decision or suggestion he may fly to the Uk to defend the letter he disclosed to The Daily Mail Online  will worsen his relationship with his daughter.

The man whose rift with his royal daughter has become more of a public book appears to be volunteering to attend the court hearing between the Dutch and Dutchess Of Sussex and the Daily Mail Online to give his side of the story. This will almost guarantee either an embarrassment for Meghan Markle, or an open court showdown which would be bad for Meghan’s image if that were to happen.

Meghan Markle and her husband Prince Harry, are currently on a tour in South Africa.

Thomas Markle, who resides in Mexico, was notably absent from his daughter’s wedding after withdrawing due to a heart attack.

75 year old Mr Markle has not seen his daughter in person since 2015 and has not met his  grandson Archie.Law firm Schillings, representing the Duchess, said she had filed a High Court claim against the paper and its parent company Associated Newspapers over the alleged misuse of private information, infringement of copyright and breach of the Data Protection Act 2018.

The case will highlight the ongoing rift between Meghan Markle and her father, Thomas Markle, caused by his past actions of selling stories to the press. Some critics have said Meghan Markle ought to make peace with her father .