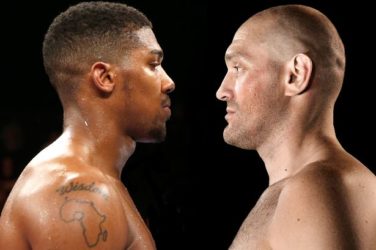 Anthony Joshua has told mouthy Tyson Fury to “shut up” and give him a date when he will be back.

The IBf heavyweight champion, who fights Klitschko for both the IBF and WBA champion, Wladimir Klitschko on April 29 at the London 02 arena.

Fury has not boxed since he beat Wladimir Klitschko
in 2015, and has bloated to 28 stones since then. His license is still suspended by the British Boxing Board of Control, and investigations over allegations of drugs have not been completed.

Instead of Fury keeping fit and ticking off until his return, the former champion has let himself go and returned to reckless feeding and alcohol habits

His attack on Joshua is purely vain because the Londoner is probably the most popular boxer this country has had, and he has been delivering the goods again and again.

Most experts would tip Joshua to knock out Fury, if the pair were to fight tomorrow, the Londoner will. So, instead of the former gypsy king talking for the vain sake of it, he should get in a gym and stay there until he is ready to fight.

Joshua is the star of attraction in the heavyweight scene at the moment, certainly as far as Britain is concerned. Fury will have to wait until he is ring fit and meets and beats someone like Deontey Wilder .

Fury did well to beat Klitschko in 2015, but that victory is not enough to establish the gypsy giant as the heavyweight’ s top dog, now that he has been stripped and has been active. Joshua will do better
Against Klitschko than Fury did. Fury should stop talking until he is ready to start fighting