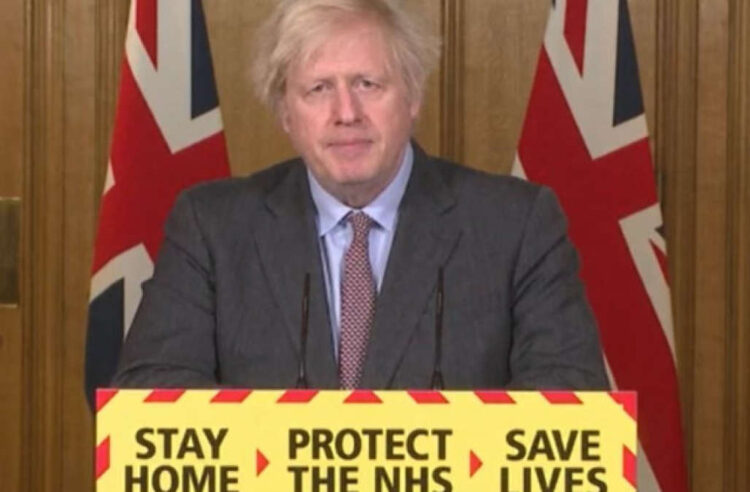 Boris Johnson is awaiting new data on the impact of vaccines on coronavirus after stressing he will take a “cautious and prudent approach” to easing England’s third national lockdown.

The Prime Minister is understood to be expecting evidence on the impact of the UK’s jabs programme on hospital admissions and deaths by the end of Friday, ahead of setting out his “road map” next week.

But it was unclear whether the early data would include the impact on transmission, with the results of two key Public Health England (PHE) studies potentially not ready until next month.

Meanwhile, major research showed lockdown measures were significantly driving down infection levels across the nation, but that they remained high and at similar levels to those observed in late September.

Imperial College London’s React study, which tested more than 85,000 people in England between February 4 and 13, suggested infections had dropped to just one in 200 people.

The study suggested infections were halving every 15 days, and the R number – which expresses how many people the average infected individual spreads the virus to – is at 0.72.

But, with the number of Covid-19 patients in hospitals remaining higher than during the first wave in April, experts called for caution in easing restrictions.

Steven Riley, Imperial’s professor of infectious disease dynamics, said that “because prevalence is high, there essentially isn’t a lot of headroom – there isn’t a lot of leeway”.

Mr Johnson stressed on Wednesday that any easing of restrictions needs to be in stages and in an “irreversible” way as he was urged to focus on the evidence rather than deadlines when lifting restrictions.

During a visit to a mass vaccination centre in South Wales, he was asked about a call from the Ministry of Defence’s chief scientific adviser, Professor Dame Angela McLean, for any unlocking to be based on “data, not dates”.

“That’s why we’ll be setting out what we can on Monday about the way ahead and it’ll be based firmly on a cautious and prudent approach to coming out of lockdown in such a way to be irreversible.”

Mr Johnson will consider evidence on how vaccines have been affecting coronavirus case numbers, hospital admissions and deaths before detailing his plans on Monday.

However, two key PHE studies on the impact of vaccines on the transmission of Covid-19 – the Vivaldi study on care home residents and staff, and the Siren research on healthcare workers – may not be available until next month.

Dame Angela was asked if the R value needs to be at a certain level before restrictions can be eased as she appeared before the Commons Science and Technology Committee.

“I think the timing is probably more important. It’s how many of the people who are more at risk – that’s a mixture of old people or people with underlying conditions – have been vaccinated before we do more unlocking,” she told MPs.

“The important issue is to really watch very closely what is happening, so if infections start to increase, and that we do everything we can to decide whether it is a good moment to take another step in unlocking.

Government figures showed 15,940,972 people had received coronavirus vaccines in the UK, a rise of 364,865 on the previous day. A further 738 people had died within 28 days of testing positive for Covid-19 as of Wednesday, bringing the official UK death toll 118,933.

Mr Johnson has said he is “reluctant” to link high coronavirus death rates in the south Wales valleys to austerity measures imposed by previous Tory Governments.

The world’s first study that will deliberately expose volunteers to coronavirus to establish the smallest amount of virus needed to cause infection will begin in the UK within weeks.

The Daily Telegraph reported parents of secondary school pupils would be asked to test their children twice a week with rapid lateral flow tests under Government plans.

A leaked Government document, seen by The Guardian, said England’s most deprived communities were hit by a “perfect storm” of wage, housing and testing-and-trace issues that led to high coronavirus rates.

Four major studies into the cause, symptoms and effects of long Covid will be boosted by £18.5 million of Government funding.