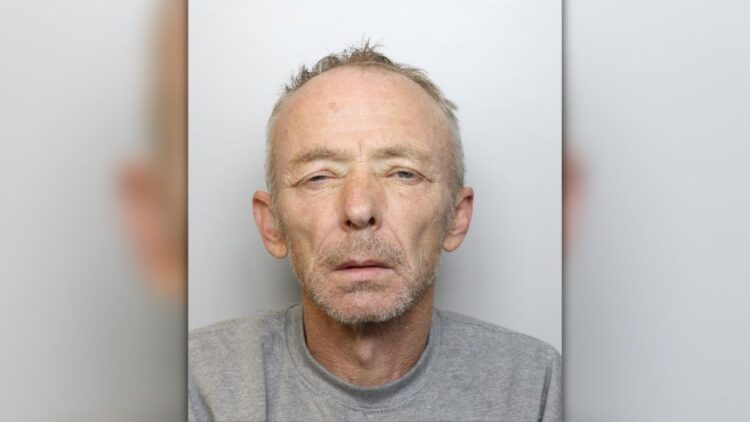 A jailed  husband who was obsessed coercive and controlling,  murdered his wife, after realising she was trying to break free from a toxic relationship  is a big lesson for all women to learn from.

Mark Barrott, 55 (pictured) was so obsessed with his wife,  and controlling of her, that he virtually would turn up at her work place whenever she worked late and did not turn home on time.

Barrott  was the subject of a nationwide manhunt after the murder in the Whinmoor area of Leeds,  and was traced 400 miles away to a monastery in north-east Scotland where he was using an alias.

He had admitted manslaughter but denied murder on the grounds of diminished responsibility. He claimed in court that he believed his wife was possessed by a demon and he wanted to kill it.

After a two-week trial by jury at Leeds crown court, Barrott, now 55, was last month found guilty of murdering Eileen, who was 50.

On Monday, Judge Andrew Hatton, sitting at Bradford crown court, jailed Barrott for life with a minimum term of 21 years. He described his crime as “a final act of control” after a long history of domestic abuse.

Det Ch Insp Vanessa Rolfe, the senior investigating officer, said Barrott was “responsible for an appalling catalogue of coercive and controlling behaviour against his wife, Eileen, over a number of years.

“When he realised that she was trying to finally break free from this toxic relationship, he acted with murderous intent. His cruel and selfish actions have robbed Eileen’s family and friends of her and left a huge hole in their lives.”

Mark Barrott, 55, strangled Eileen Barrott, 50, and attacked her with a hammer in what the judge described as a “final act of control” at their home in Leeds.

The trial at Bradford Crown Court heard that Barrott had subjected his wife to years of abusive behaviour, monitoring her phone and stalking her at work and social events.

Mrs Barrott’s body was discovered at their home in Naburn Fold, Whinmoor, by their son, Joel, now 21.

Barrott refused to appear in court as he was sentenced to a minimum of 21 years in prison, claiming that he had taken a drugs overdose in prison.

Eileen had worked as a staff nurse at Leeds teaching hospitals NHS trust since 1996, most recently at St James’s hospital. When she worked late he would go there demanding to know where she was. The court heard that he would turn up unannounced when she was out socialising, causing a scene and being confrontational with her friends and colleagues.

Barrott stalked his wife physically and electronically. using a mobile phone and tracking device hidden in her handbag. He frequently checked her mobile phone and deleted contacts that he did not approve of.

Barrott went on the run, travelling to Edinburgh and Aberdeen. After a nationwide alert, he was traced to Pluscarden Abbey, near Elgin, where he had been hiding using the alias of John Connolly.

Mark Barrott, 55,  who murdered his wife, Eileen, at their home in Whinmoor last year  did not attend his court hearing to be sentenced  after taking an overdose last night at Newton Lodge, the psychiatric unit in Wakefield where he is being held.

The jury  found  him guilty of murdering his wife at their home on Naburn Fold, in August last year.

His wife’s body was discovered by the couple’s son.

During the trial it was heard that he suffered from obsessive compulsive disorder (OCD) and a depressive disorder, and had been a controlling and abusive husband towards Eileen for years.

Mrs Barrott had threatened to leave him on several occasions, but her husband would persuade her to stay using threats of suicide, the court was told.

Judge Hatton said it was clear from the evidence that she had again decided to leave on 4 August 2021, but by 10 August had opted to stay.

“I am satisfied she changed her mind on the evening of the 14th or the morning of the 15th,” the judge said.

“This time you knew there were no final chances. Your pathetic threats of suicide, your control and manipulation, had come to an end and you killed her in a final act of control over her.”