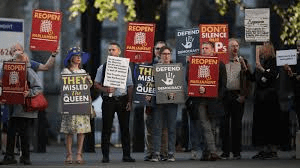 The British courts seem to be sending conflicting messages on how the case for and against Boris Johnson’s decision to prorogue Parliament should be handled.

The High court first ruled the actions of the executive were ‘non-justiciable’ – meaning they were not to be examined by judges. This meant that the prime minister’s decision to suspend parliament was outside the remit of the courts and purely a political decision.  However,  the Scottish appeal court ruled the decision unlawful, arguing that mr. Johnson had suspended parliament with the improper purpose of stymying  Parliament. They ruled that the decision was ”void and of no effect”. The decision was appealed by the government, keeping Johnson’s suspension of parliament well in effect until the Supreme Court ruling on the case,

The case was  originally  brought to the Court of Session by a cross-party group of 75 parliamentarians, leading to well qualified judges of high experience contradicting their colleagues judgement in different courts. The Supreme Court today concluded 3 days of passionate submissions from opposing sides of the argument.  A final ruling is expected next week. Already indications are that even if the verdict goes against the British government, Boris Johnson may keep parliament suspended. This seems to mean that if the court rules the decision to suspend parliament unlawful, Johnson may consciously break the law. This is an unthinkable scenario which must be viewed as nothing more than speculation at the moment.

The real issue is why the courts themselves are divided on the matter. After all, these are highly trained judges in their field. Can Their disunity on the case is almost as bad as the division in parliament on Brexit itself. The courts should  have one clear voice on a matter this serious, with lasting consequences.

Johnson is trying to end the monotonous cycle of debate over Brexit and just get the ball rolling, deal or no deal. He doesn’t want to find himself in a similar position as his predecessor, Theresa May, in which Parliament is forever arguing about how we leave the EU. The only problem with his planned approach is the readiness to take the Uk out of Europe no matter the consequences on the country. A document published this week that revealed a catalogue of set backs that would accompany a no deal, including several delays at airports.

It  highlights  up to one-and-a-half and two-and-a-half days would occur at Dover and public disorder could increase, according to the documents. Operation Yellowhammer documents  leaked to the press, detailed how Britain would be left vulnerable without a deal.

The dossier warned of shortages of fuel, medicine and food, protests, road blockades and chaos at the ports.
It says: “There are likely to be significant electricity (price) increases for consumers.”
The document also reveals: “Protests and counter-protests will take place across the UK and may absorb significant amounts of police resources. In another  report published on Thursday, the OECD said: “A no-deal exit would be costly in the near term, potentially pushing the UK into recession in 2020 and reducing growth in Europe considerably.
“Even a relatively smooth no-deal exit, with fully operational border infrastructure, would have large costs.

If parliamentary Mps can already foresee the dangers that lie ahead, it is no wonder they are fighting hard to prevent a no deal Brexit . All eyes will now be on the Supreme Court to rule on whether the decision to suspend Parliament is lawful or not.