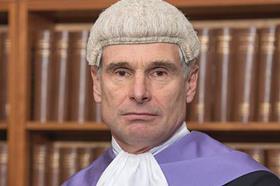 A High Court judge has condemned a senior judge who appeared to condone rape in circumstances where the victim does not physically resist their attacker.

The Honourable Ms Justice Russell DBE, in the family division of the High Court JH v MF condemned His Honour Judge Tolson QC’s judgrment last August, saying his judgement was ‘so flawed as to require a retrial’. The decision, in which he found against a mother of a young child in a case relating to allegations of domestic abuse and serious sexual assault, was ‘unjust’, he said.

Ms Justice Russell said the flawed senior judge used obsolescent principles in his ruling which had potentially serious implication for legal rulings in domestic abuse.  HHJ Tolson’s made his order was made following a fact-finding trial in Children Act 1989 proceedings for child arrangement orders.

However, in a critical judgement, Russell J said the judge failed to consider or appreciate the concepts and reality of domestic abuse, control and coercion, ‘and the fact that such abuse is not confined to physical violence’.

His approach on consent ‘is manifestly at odds with current jurisprudence, concomitant sexual behaviour, and what is currently acceptable socio-sexual conduct’.

‘This is a senior judge, a Designated Family Judge, a leadership judge in the Family Court, expressing a view that, in his judgement, it is not only permissible but also acceptable for penetration to continue after the complainant has said no (by asking the perpetrator to stop) but also that a complainant must and should physically resist penetration, in order to establish a lack of consent.

”This would place the responsibility for establishing consent or lack thereof firmly and solely with the complainant or potential victim’, she fumed.

She said the ‘judge’s conclusion on whether sex was consensual or not is wrongly predicated on the presumption that to establish non-consensual penetration the complainant should have physically resisted.

The logical conclusion of this judge’s approach is that it is both lawful and acceptable for a man to have sex with his partner regardless of their enjoyment or willingness to participate.’ HHJ Tolson employed ‘obsolescent concepts;’ about consent.

Russell J said family court judges are regularly required to make decisions and find facts in cases where there is domestic abuse. However, they are not required to undergo training on the appropriate approach to take when considering sexual assault allegations where consent issues are raised.

The family division president is to ask the Judicial College to train judges who might hear cases involving serious sexual assault allegations in family proceedings based on training already provided to criminal judges.

Russell J said the case ‘was another example of the difficulties encountered by litigants in person when public funding is not available to the party against whom complaints are made; and of the way in which justice or a fair trial is compromised when the judge is required to enter the arena”.

In one word, Ms Russell was brilliant, and  HHJ Tolson was awful!