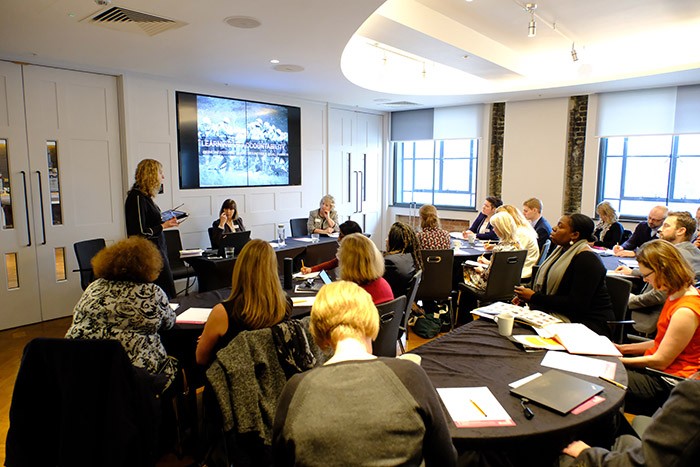 The Headteachers’ Roundtable, a think-tank which speaks with an authority rooted in our daily collective knowledge and understanding and the unique lived experience of leading our nation’s schools.

The thinktank’s aim is to provide an authentic voice to government to challenge or support ideas which enable people in Uk schools to thrive and flourish. Operating as a  non-party political headteachers’ group , the think-tank explores policy issues from a range of perspectives.

Their collective goal is to provide a vehicle for people working in the profession to influence national education policymakers so that education policy is centred upon what is best for the learning of all children.

The group also calls for a tenth year sabbatical available to all staff to “enhance current understanding or experiences relevant to developing further subject specific knowledge or pedagogical research or technical expertise”.

A bursary  for trainees which must be repaid in full if they go on to leave the profession within eight years is also on their list of demands. The group has backed calls for a ten-year funding plan for schools – similar to the funding deal the government has announced for the NHS.

Education committee chair Robert Halfon has been particularly vocal on the issue. He said it was “inexplicable and astonishing” that the health service has a ten-year funding and strategic plan but the education sector doesn’t.

The HTRT also stipulate as part of their election manifesto the requirement of a ten-year budget, from 2020-2030, must “reverse the real term reduction in budgets and provide extra funding to meet the needs of our children”.

Head teachers also want the Department for Education to present funding in the “same format year on year”. The call follows much concern over the department’s attempts to claim it’s £7.1 billion cash injection is actually £14 billion.

RECOMMENDATION
The group also included a major recommendation in the recent Timpson review calling for the results of excluded pupils to stay on the books of the excluding school. They say the current system, where the outcome is on the school the child attends at the end of year 6 or 11, is the “root cause of some unethical behaviour”.

Stephen Tierney, chair of the HTRT, has previously written for Schools Week about how proportionate accountability could work.

The group also wants contextualised or comparative measures introduced to ensure schools that schools with the greatest numbers of deprived pupils are “recognised and not punished”.

The group expressed its support for  Labour’s controversial proposals to scrap Ofsted.

The HTRT wants inspection of schools to be replaced by peer review and evaluation with a trained HMI on every team. They also favour scrapping key stage 1 SATs (another Labour proposal) and calls for key stage 2 SATs scores to be no longer be publicly reported”.

They want a new statutory “assessment of best provision” to enable children to receive the “best possible education and care”.

This would mean a new system to focus on directly funding special needs provision through a high needs funding formula, instead of attaching a certain amount of money to each child and a list of the different things they should receive.

The group wants the type of provision and the number of places to be determined at national level, avoiding the “damaging system of each local authority determining different levels of funding for children with the same need”.

HTRT argues this system would make it easier to cost out provision, and could even give responsibility for funding directly to the ESFA rather than local authorities. It would also help schools to budget and manage the expectation of parents, rather than promising pupils provision that they will never be able to receive.

ORIGINS
The Headteachers’ Roundtable originated from a round table meeting  at The Guardian newspaper offices in 2012 out of frustration regarding current government educational policy and the Opposition response to it.

The group attributes its origins and subsequent growth are down to the power of Twitter as a tool for connecting people determined to bring about change where necessary.