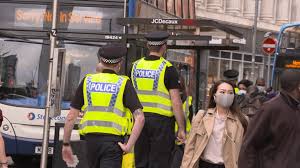 A serving police officer  from Greater Manchester Police has shamed the force after  pleading guilty to stealing tactical boots and jackets from his fellow cops.

Edward Ballantyne-Rowland, 24, had only recently been employed as a police officer based in the Oldham District when a number of items were taken from the station’s locker room.

His colleagues became suspicious when he began wearing boots  reported to have been stolen, Manchester Magistrates’ Court heard.

PC Ballantyne-Rowland initially denied the offences, stating to officers in an interview that they were ‘abandoned’, but on Thursday admitted three offences of theft.

His sentence has been adjourned to next month to allow for the preparation of presentence reports.

Gavin Hughes, prosecuting, said PC Ballantyne-Rowland had only recently become a police officer and was based at Oldham.

“Property was stolen and taken from the locker room of Oldham Police station,” he said.

“Others became suspicious as he was wearing boots which were reported to have been taken.

“This led to his locker being searched and his home address, and the property was recovered from either of those places..
“The defendant did deny the offences in interview, he said they had been abandoned or left.”

In a victim personal statement, the first officer said: “Although there has been no financial loss to me, this was a theft of items given by force. I feel I have been violated and I can no longer trust my colleagues.

The second officer said: “I have been a police officer for 15 years and the whole time I have trusted each and every officer.

“This incident has totally shocked me and I don’t understand how an officer can steal personal property from another.

“It is like stealing money, and it is making me think ‘who can I trust’.”

PC Ballantyne-Rowland was said to have no previous convictions.

His defence lawyer, Evan Wright initially suggested that the court could adopt a lower sentence in the sentencing range for the offence.

But, District Judge Joanne Hirst said she ‘didn’t believe’ she could rule out a custodial sentence.

“This was a significant breach of trust.

“I would like to have the bones [of the case] fleshed out.”

The news brings the beleagured force to further disrepute after GMP had the second highest number of complaints of sexual misconduct by officers in the country, according to a watchdog.

There were 20 such allegations made against officers by the public.

The allegations included  abuse of powers for sexual purposes – for example befriending a victim of domestic violence and having an inappropriate relationship – which can lead to misconduct hearings and dismissal.

GMP   was also  criticised for taking an average of five days to log complaints, and four days to contact complainants.