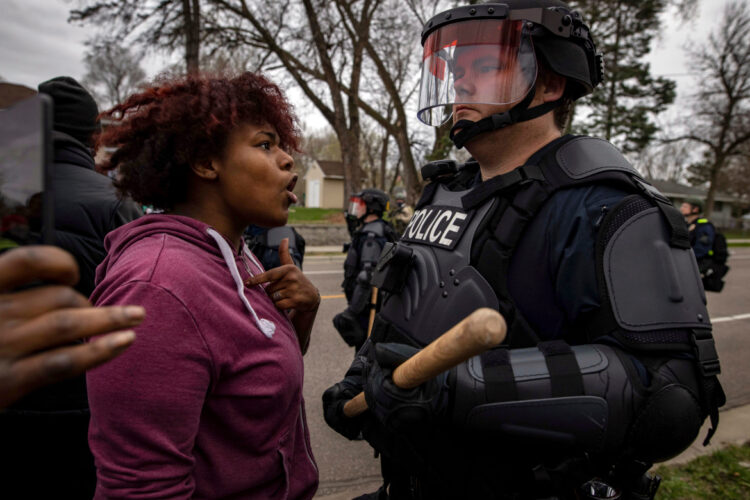 Fresh controversy has been sparked after  after police fatally shot a black man in a traffic stop in the US city of Brooklyn Center, just north of Minneapolis.

The man has been identified by relatives as 20-year-old Daunte Wright. Wright was shot after he went back into his car following a police stop n which he was being questioned.

Tensions in Minneapolis are high as the trial of a former officer accused of kiFlling George Floyd takes place.

Protesters wrote with chalk on pavements and lit candles, but police later ordered the protesters to disperse, with footage showing tear gas and stun grenades being fired by officers.

In an early-morning video post on the death of Daunte Wright, Mayor Elliott said “our hearts are with his family” and pledged “we are going to make sure that everything is done in our power to ensure justice”.

They stood with helmets, shields and other riot gear, adamant about keeping the building safe.

Hundreds of protesters tried to inch forward, chanting: “If we don’t get no justice, they don’t get no peace.”

Some kneeled in front of the police with their hands on their heads. Others stood silently with signs that listed names of African Americans who had been killed by the police.

Among the crowd were some of Daunte Wright’s friends and relatives. Throughout the standoff, the police would fire off smoke and flash bombs if they thought protesters were getting too close, or if the crowd seemed it was getting too big and unmanageable.

It was an all-too-familiar scene for communities still reeling from the riots during the summer of 2020 in the aftermath of the killing of George Floyd.

As the verdict in the trial over his death looms, Sunday’s events show just how much those communities are on edge.

In a statement, the Brooklyn Center Police Department said officers had pulled a man over for a traffic violation on Sunday afternoon and determined that he had an outstanding arrest warrant.

An officer then shot the driver, who drove on for several blocks before he crashed into another vehicle. He was pronounced dead at the scene.

A female passenger in the vehicle suffered non-life-threatening injuries.

Police said the officers involved were wearing body cameras, and dash cameras had also been activated.

Mr Wright’s mother, Katie, said her son had called her during the traffic stop and he said he had been pulled over because of “air fresheners hanging from his rear-view mirror”. She said she then heard scuffling and the phone line was cut.

“A minute later, I called and his girlfriend answered, who was the passenger in the car, and said that he’d been shot… and my son was laying there lifeless.”

She said her son’s body had been left on the ground by officers, adding: “Nobody will tell us anything. Nobody will talk to us… I said please take my son off the ground,” the StarTribune reported.

Mayor Elliott said the shooting was “tragic” and Governor Walz said: “Our state mourns another life of a black man taken by law enforcement.”