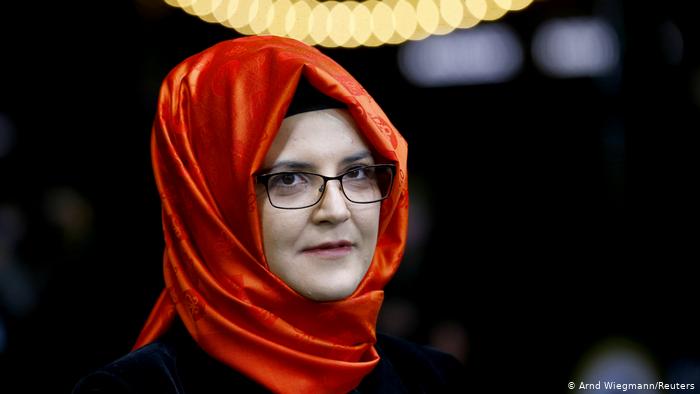 The fiancee of murdered journalist Jamal Khashoggi is pleading with Anthony Joshua and Tyson Fury to turn down a potentially “shameful” deal with Saudi Arabia to host the fight of the century.

Hatice Cengiz(pictured)  is protesting against Saudi Arabia hosting the fight, after claiming that accepting a potential £100million-plus offer would present the crown prince, accused over his alleged role in her partner’s killing, with a “reward for his crimes”.

Her last minute intervention comes after Fury confirmed Saudi Arabia is one of the frontrunners to land the fight.

A venue that will  stage the heavyweight championship fight is expected by the end of the weekend.

Fury spoke late on Friday of “three or four big offers on the table”, including “interest from Saudi Arabia”, as well as approaches from “my gypsy brothers in Qatar, Uzbekistan, Russia, America, England”.

The two-fight deal will unify the world heavyweight titles and present the winner as the world’s  no 1 heavyweight.

Saudi Arabia developed a relationship with promoter Eddie Hearn after Joshua fought his rematch against Andy Ruiz Jr in Riyadh in 2019, is thought to have tabled the biggest offer.

She told The Daily Telegraph:

“I cannot believe after all this time, and all the evidence showing his guilt, that the Saudi Crown Prince is still being considered as a ‘host’ for such world sporting events, which he is using for political reasons and to clean his image,” she said in a statement sent to The Telegraph.

Cengiz added: “Sports should not be used for politics, nor to whitewash atrocities. Jamal was brutally murdered and it would be shameful if the man who stands accused of ordering it were allowed to benefit from this famous and profitable boxing match.

I urge the organisers not to give him this reward for his crimes. We should instead stand together for justice and humanity.”

Her lawyer, Rodney Dixon QC, of Temple Garden Chambers, added: “In pursuing all legal avenues to obtain the truth and justice for Jamal’s murder, we are asking the organisers of this prestigious event to stand on the side of the rule of law, and not to allow it to be hosted by the accused.”.

Fury announced on Friday that he had “offers on the table” to fight Joshua and would be looking through them and making a decision today (SUN). Before leaving for Las Vegas to go into training, he said: “There’s some big, big offers on the table and I’m going to go through them on Sunday. Hopefully we will get this big fight on.”

Fury holds the WBC heavyweight title, and previously held the WBA, IBF and WBO belts, which are now in the possession of Joshua, after he defeated Wladimir Klitschko for the belts in 2016, when Fury was out of the picture following mental health issues, and a failed drugs test.

Hearn has also described Saudi as “a definite possibility”. He previously said the choice of Saudi over Abu Dhabi, Dubai and Qatar for the Ruiz fight had been because, “we wanted to go somewhere that had a vision for the sport of boxing”.

MBS has pressed ahead with dramatic reform to modernise Saudi but campaigners have repeatedly said his attempts to invest in sport – including the failed £300m takeover at Newcastle United – are an insult to alleged human rights abuses of the country’s population.

Kate Allen, director of Amnesty International UK, has  previously expressed concern of the prospect of Fury-Joshua taking place in the state at a time “as a means to sportswash its atrocious human rights record”.

“Crown Prince Mohammed bin Salman wants people around the world to be talking about sport in Saudi Arabia, not the dissidents being locked up after sham trials or the people being tortured in Saudi jails,” she told The Telegraph.

Bill Law, a Middle East analyst and editor of Arab Digest, added: “I don’t want to sound like a moraliser here, but if you want to ask me ‘do I think that these sports people should be taking the big money?

On a moral and ethical grounds, I would say absolutely not…. Jamal was a great journalist. He was a lovely guy. What happened to him was unspeakable, so I look at these fighters, these Anthony Joshua vs Tyson Fury.