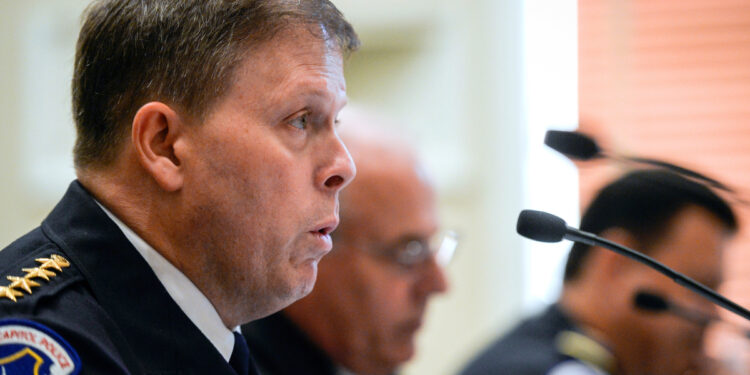 The former chief of U.S. Capitol Police says security officials at the House and Senate spurned early requests to call in the National Guard ahead of a demonstration in support of President Trump that turned into a deadly attack on Congress.

Former chief Steven Sund ([pictured)who resigned his post last week  said he worried that the protest would turn violent but was unable to get help until the violence was at its peak.

“We knew we would have large crowds, the potential for some violent altercations,” he said.

Four civilians and a Capitol Police officer died as a result of Wednesday’s attack, which plunged Washington into chaos and prompted calls for President Donald Trump to be impeached for his role in inciting the violence.

Sund’s claim contradicts others made by officials after Wednesday’s assault on Capitol Hill. Sund’s superiors said previously that the National Guard and other additional security support could have been provided, but no one at the Capitol requested it.

Sund said that House Sergeant-at-Arms Paul Irving was concerned with the “optics” of declaring an emergency ahead of the protests and rejected a National Guard presence. According to him, Senate Sergeant-at-Arms Michael Stenger recommended that he informally request the Guard to be ready in case it was needed to maintain security

Sund says he requested assistance six times ahead of and during the attack on the Capitol. Each of those requests was denied or delayed, he says.

During Wednesday’s violence, Bowser requested, and received, a limited force of 340 from the D.C. National Guard. Those troops were unarmed and their job was to help with traffic flow — not law enforcement, which was meant to be handled by D.C. police.

When the mob reached the Capitol complex at about 12:40 p.m. ET on Wednesday, it took about 15 minutes for the west side perimeter of the building to be breached, he says. The Capitol Police contingent, which numbered around 1,400 that day, was quickly overrun by the estimated 8,000 rioters.

The FBI today warned of the possibility of armed protests being held across the US in the days before Joe Biden is sworn in as president.

There are reports of armed groups planning to gather at all 50 state capitols and in Washington DC in the run-up to his 20 January inauguration.

On Monday, Mr Biden told reporters he was not afraid to take the oath of office outside of the US Capitol.

“If we would have had the National Guard we could have held them at bay longer, until more officers from our partner agencies could arrive,” he says.

Sund says during a conference call with several law enforcement officials at about 2:26 p.m., he asked the Pentagon to provide backup.

National Guard troops arrived over 3 hours later, well after the damage at the Capitol had been done.

In the interview, Sund also issued a warning to federal officials, saying “if they don’t get their act together with physical security, it’s going to happen again