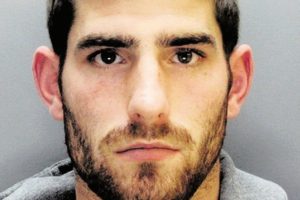 Footballer, Ched Evans is not guilty of raping the drunk girl who accused him of rape, a court found today.

The Chesterfield striker was unfairly accused of raping a drunk girl at a premiere Inn in Rhuddlan Debingshire on 30 May 2011. The 27-year-old was initially found guilty of rape at Caernarfon Crown Court in 2012 in 2012, before later being squashed in 2012.

At Cardiff Crown court today, he was found not guilty. After 2 weeks in the dock, he was cleared by a jury of seven women and  five men. There was an overwhelming evidence of joy and relief in the court, most notably from members of his family. Evans had joined fellow footballer Clayton Donald, also 27, to have sex with the woman on a night out when she had a few to drink. There was no evidence the girl did  not consent to sex, but when a girl claims she does not remember saying yes , then trouble looms for the man on the receiving end of such complaints.

Legal sex between two adults is based on mutual consent, and a woman too drunk to remember consenting, may arguably not have consented. The legal profession has enough lawyers to argue this out, and legal team for the CPS can suggest drunken sex cannot include consent. This is obviously debatable because once consent is verbally or given  by way of action. it is consent. The other side to the coin is that intoxication to  a level that means the girl was not in charge of her faculties, can  suggest a lack of consent, especially if the man is able to determine this, but selfishly overlooks it.

Mr Evans was initially jailed for 5 years after his original conviction, but released 2 years later in 2014,following a referral to the Court of Appeal after a 10-month investigation by the Criminal Cases Review Commission(CCRC) which found new information not raised at the original trial.

It had emerged that the same woman had sex with two other men, in which the details of the experience bore an uncanny similarity to that of Mr.Evans.  One of those cases involved the woman the day before the alleged rape by Evans, and another, the day after the alleged rape  .In both cases, the girl used similar tactics to encourage the men, only to claim to have had no memory whatsoever of the sexual encounter . She may have been completely out of it on drink, drugs, or a  cocktail of both. That’s her best defence. At worst, she is a dangerous manipulative individual who men should avoid.

There are many women who are the victim of senseless rapes, and this woman undermines the seriousness and pain of the experiences they go through. The verdict of an acquittal, in this case, was right, but the damage to his reputation has been done, though can probably be retrieved. One lesson Evans should learn from this is to find one lover and stick to her, instead of indulging in cheap, lustful sexual activities with slags(forgive my French)of this kind. No girl who respects herself would sleep with three men in the space of two days, as this girl did and claim each time to have forgotten the encounter.

Whatever she is playing at, she played with the wrong player on this occasion, who himself has been taught a lesson of sorts.