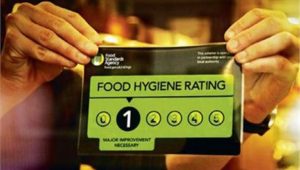 Standards of food hygiene are low in many UK food businesses, according to a research study.

Consumers face a disappointing one in three chances of buying food from a business practicing good hygiene, according to Which? – the organisation evaluating hygiene standards in food outlets.

Analysing data submitted to the Food Standards Agency (FSA) and Foods Standards Scotland (FSA) by 386 local authorities, the consumer group ranked the local authority areas according to levels if high and low hygiene.

A spokesperson of the group told the eye of media.com ” there is still a big gap when it comes to standards if food hygiene in various parts of the UK. Many food outlets need to improve their standards if hygiene all round. The Food Standards Agency is exploring various methods of ensuring tighter checks on how food businesses conduct their operations “.

Food businesses with low hygiene standards subject consumers to a high risk of falling sick because of a bug in the food. Staff inany MacDonald branches, for instance, prepare burgers with their hands instead of using gloves. This means the microorganisms from their hands, the number if which will depend where their hands have been, can be transferred to the food , infecting the consumer as a consequence .

The real message is that it is generally safer and healthier to buy your own food and cook at home instead of taking the gamble that some food business serving lots of unhealthy food will have high hygiene standards when we know most of them don’t .

A number of restaurants in Newham have already been fined for operating a business in very unhygienic environments where rats and mice have been running around by inspectors when they arrived . Many use filthy clothes to clean plates, knives and forks, and so not wash their hands before handling food.

There are many hygienic food outlets in the UK, but it is every consumers responsibility to inquire about procedures in the food outlets of interest, especially by researching the ratings provided by inspectors.

The lowest rated local authority area for food hygiene is Hyndburn in Lancashire, with only 35 percent of them meeting standards of hygiene. With a percentage so low in that area , it confirms the level of carelessness and recklessness shown by businesses that only think of their pockets.