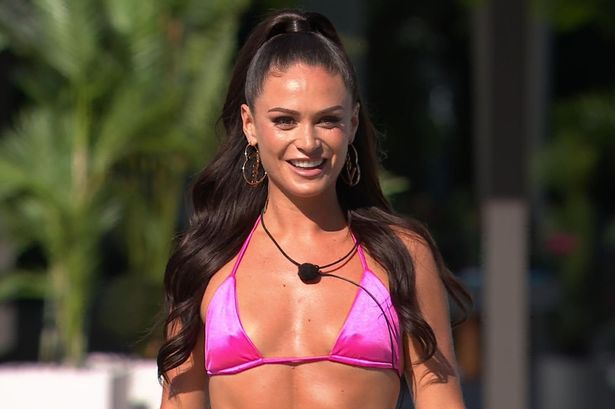 EastEnders fans were  excited, after spotting a current Love Island star in Albert Square on Wednesday.

Ring girl Olivia Hawkins(pictured) was spotted in Walford on the BBC soap just an hour before featuring on ITV 2’s Love Island yesterday.

Olivia was first seen strutting into Ruby’s nightclub with a friend, before having a drink in the bar while Albert Square’s new hunk, Zack Hudson, went on the hunt for Whitney Dean.

Zack enters the club looking distraught as he chats to Sam Mitchell, asking if she’d seen Whitney recently. In the background, a cute brunette seems to have caught Zack’s eye, he glances over and she sends back a flirty gaze

Fans rushed to social media to express their excitement at spotting the Love Island contestant in EastEnders.

One said: “Not Olivia being on tonight’s EastEnders, sis is getting that bag.”

Another viewer said: “Not me watching tonight’s EastEnders on iPlayer and Olivia from Love Island pops up as an extra.”

Olivia has previously spoken about wanting to work more on television.

Prior to going into Love Island, she told The Sun: “It would be a full circle moment to go on and be one of the characters – even if I was just a drop-in that would be fun.

“I feel like I’d maybe just be the girl from Sussex. I don’t do a great Cockney accent.”

She said: “I haven’t told the producers yet, but I do walk and sleep talk. I’m just hoping that I don’t because that could be quite embarrassing – or entertaining.

“I had a shower in my sleep once. Obviously, it woke me up, but yeah, my mum said ‘what are you doing? It’s 2am and you’re up getting ready for school?’.”

Last night she found herself trapped in a love triangle on the second episode of Love Island.

She was coupled up with farmer Will Young but caught the attention of new boy Tom Clare.