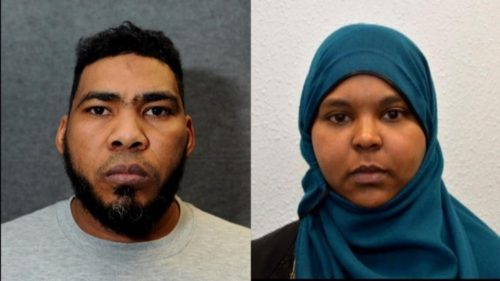 A couple has been jailed for plotting a terrorist attack on UK soil.

33-year-old mother of two, Rowaida El-Hassan from Willesden Lane, used her knowledge of chemicals to try to create a homemade bomb after she met 36-year-old Munir Hassan Mohammed on dating website SingleMuslims.com.
Mohammed volunteered, who was an asylum seeker, volunteered to execute a “lone wolf” UK mission as he chatted on Facebook with a man he believed was an IS commander and enlisted the help of El-Hassan to plan the Christmas bomb or ricin attack, the court heard.
The evil pair were found guilty of preparing terrorist acts between November 2015 and December 2016 following an Old Bailey trial in January.
The court heard Sudanese asylum seeker Mohammed was drawn to UCL graduate El-Hassan because of her Master’s degree in pharmacy in her dating profile
Sentencing both at the Old Bailey , Judge Michael Topolski QC jailed Mohammed for life with a minimum of 14 years.
El-Hassan, his “willing” and “enthusiastic” partner, was jailed for 12 years plus five years on extended licence.
She never objected to being sent the videos as her two children slept in her bedroom, and even asked for more, the judge said.

”You had not decided whether that would be made with an ordinary bomb or whether you could do more damage and instil more terror by exploding a device containing ricin.”

He “carefully and deliberately” drew El-Hassan into the point where her commitment was “consistent and sustained”, the judge said.
The court heard that Mohammed arrived in Britain in the back of a lorry and claimed asylum in February 2014.
He became “frustrated” at being kept in limbo for three years and appealed to Labour MP Margaret Beckett for help with his immigration problems.
Using false identity documents, Mohammed worked at Kerry Foods in Derby, where he made sauces for supermarket ready meals
According to her dating website, she was looking for a simple man to “vibe with on a spiritual and intellectual level”, according to her dating profile. The pair became in regular contact on WhatsApp by the spring of 2016 and had met three times in a London park near El-Hassan’s home. In August 2016, Mohammed offered to do “a new job in the UK”, while chatting with an IS commander online.
In coded language, Mohammed requested how to make “dough” (explosives) for “Syrian bread” (a bomb) and “other types of food”.
When police raided his home on December 12 2016, they found hydrogen peroxide in a wardrobe and hydrochloric acid in the freezer.
In mitigation, Charles Bott QC said:

“Mr Mohammed did not come to this country to attack it. He worked hard and he studied diligently.
“Whatever other agenda he had, he was becoming increasingly frustrated at more than three years it took to adjudicate on his application.”

The court heard that since her conviction, El-Hassan’s two children had been taken to live in Sudan.
Referring to a letter from her mother, Judge Topolski said he would need a “heart made of heavy stone” not to be moved by the plight of innocent children.
Spread the news
1
1
Share