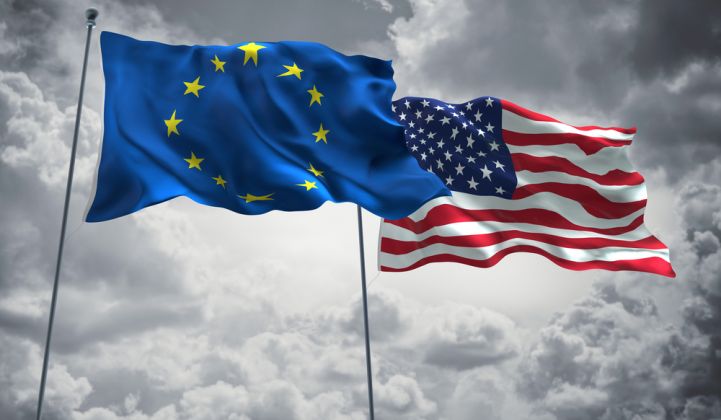 The EU and The U.S are on a collision course on the issue of trade tariffs. Trade Commissioner Cecilia Malmstrom is set to throw the final dice in talks with her U.S counterpart to achieve an exemption on the 28-nation block from President Donald Trump’s steel and aluminum tariffs.

The EU has called for a “permanent and unconditional” exemption to replace a temporary measure that runs out on 1 May. The alternative will be a series of countermeasures, it says.

“For the time being our priority is the ongoing high-level dialogue to secure a permanent exemption,” the trade commissioner said, appealing for the EU and US to work together. A European Commission spokesman said on Monday that the EU was “patient but also prepared”.

U.S Commerce Secretary Wilbur Ross is scheduled to discuss the tariffs with Ms Malmstrom ahead of a midnight deadline (0500 BST Tuesday), said some US allies will be given last-minute exemptions if they accept a quota of US imports. President Trump’s tariffs of 25% on steel and 10% on aluminum was implemented effect in March.

China has already retaliated with its own duties on U.S imports such as pork, fruit, and wine, prompting Trump to respond by calling for further US tariffs. Exemptions were granted to Canada and Mexico were as talks took place over the North America Free Trade Agreement(NAFTA), along with South Korea, Argentina, Australia, Brazil and the EU.

The EU refused to be drawn into questions on how quickly it would respond if the US refused to exempt the bloc from the trade tariffs. However, Ms Malmstrom has already outlined a draft list of U.S products amounting to over $3bn that could be hit in a counter move, including Levi jeans, peanut butter, cranberries, orange juice and bourbon. That list amounts to some €2.8bn (£2.5bn; $3.4bn) of imported goods, while the EU exports some €6.4bn worth of steel and aluminum to the U.S.