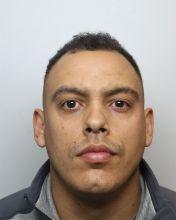 A drug dealer has been caught and  jailed  for just 22 months, after assaultung another man who allegedly disrespected him on social media.

It follows an investigation into  a gang-related violence by the Programme Precision team in Bradford.

Kane Webster, 26 from Queensbury, was sentenced at Bradford Crown Court on Monday, in relation to an assault which occurred at an address in Bradford in April this year, where he turned up at the occupant’s house after he was allegedly disrespected on social media.

The criminal received a total sentence of 22 months which included a further offence relating to the possession of cannabis with intent to supply- a relatively light sentence considering the intent to supply offence.

Some locals in the area have suggested without evidence that Webster may have been a police informer, explaining the low sentence he was given.

One local who insisted on anonymity told The Eye Of Media.Com ”when a drug dealer gets such a light sentence after being caught with so much drugs, we know he has struck a deal with police.

Another insisted there was no way Webster would have been an informer or worked with police in any capacity.

He was charged after being stopped by Precision officers in September this year, and  was found to be in possession of an estimated £15,000 worth of cannabis.

A search of an address linked to him led to the discovery of a further £35,000 worth of the Class B drug.

Detective Chief Inspector Andy Farrell, of Bradford District Police, said: “This outcome was the result of focused and targeted work with partners to identify those involved with gang-related violence in Bradford and disrupt their criminal activities.

“The Programme Precision team is committed to taking action against those who blight communities through their involvement in serious and organised crime.

“We would like to thank our partners and communities for their ongoing support and to also urge anyone with information or concerns about organised crime to report it to their local Neighbourhood Policing Team, so action can be taken with partners to address these matters.”