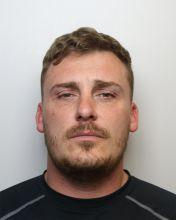 A DEL delivery driver has been jailed for seven years for killing a cyclist by driving carelessly while under the influence of drugs. He also received an 11 year ban.

Jonathon Ramsbottom was driving a Peugeot Boxer van when he collided with the high performance road machine ridden by married father-of-two Stephen White- a man training for an Ironman Triathlon.

The court found that Ramsbottom was driving too fast instead of slowing down at the junction where he should have done a turning.

Ramsbottom, 37, who is already serving a jail sentence at HMP Forest Bank, pleaded guilty to causing Mr White’s death by careless driving on May 9 last year.

“Mr White was riding his high performance road bike down a perfectly straight stretch of single carriageway road on the A646 Burnley Road, travelling from the direction of Cornholme towards Todmorden,” Judge Mansell said.

Ramsbottom was working as a delivery driver for Yodel and travelling from Todmorden in the opposite direction.

“Your next delivery required you to take a right turn off the main carriageway into Church Road. CCTV footage from a shop on the corner is of high quality and recorded the tragic collision.

“The turning is a very tight turn into what is a narrow street. It required you to slow down and take the turn carefully to enter the junction in the correct lane.

“You were driving too fast on the approach to that turning, as the CCTV graphically demonstrates. Far from slowing and taking up an appropriate position in the main road to take that turning carefully, you cut across the mouth of the junction without slowing or giving way whatsoever,” Judge Mansell said.

Mr White, who was wearing appropriate headgear and riding clothing, was projected from his cycle and suffered a catastrophic brain injury. The immediate attendance of an ambulance could not save him.

Ramsbottom stayed at the scene and showed concern for Mr White but Judge Mansell said he was driving far too fast and while still under the influence of cocaine and cannabis.

“It clearly affected your capacity to watch out for other road users, and particularly those who are vulnerable such as cyclists,” he said.

He continued: “The standard of driving on our roads has deteriorated markedly in recent years and in my judgement, based on experience not only as a Crown Court judge who has sat in Greater Manchester and now Bradford, but as a road user myself, it has reached a level that I can properly describe as appalling.

“Far too many people are in an unseemly rush to get from A to B, with little or no regard for the safety of other drivers, cyclists and pedestrians.

“This is particularly so when it comes to people who work in the kind of trade you were working in, as a delivery driver.”

Ramsbottom has previous conviction for driving over the prescribed limit in 2004, and two offences of speeding in 2018.

He was on bail at the time for a conspiracy to supply cocaine for which he is now serving a 54 month prison sentence. The seven year sentence will run consecutively to that. When Ramsbottom has served his current sentence he will then serve two thirds of the seven years.

Speaking after sentencing, Detective Constable Simon Marshall, of the Major Collision and Enquiry Team, said: “This sentence reflects the severity of the consequences of driving while under the influence of drugs, and should serve as a warning to anyone who believes they can do so safely.”