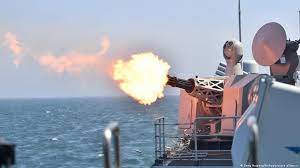 China has revealed plans for unprecedented military exercises near the Taiwan, after surrounding the Island with prompting fears of a crisis in the Taiwan Strait, after Pelosi visited the self-governing island this week in defiance of a series  of threats from Beijing.

Speaking yesterday, Ms Pelosi, the first House speaker to visit Taiwan in 25 years, said that the American commitment to democracy on the self-governing island and elsewhere “remains ironclad”.

Her visit has clearly incensed China, which claims Taiwan as  a break away province, and considers visits by foreign officials as amounting to recognising the island’s sovereignty.

Chinese state media reported the drills were in process,  after suspected drones  were seen flying over Taiwan’s territory on Wednesday, and hackers targeted the defence ministry’s website.

Taiwan said before the military exercises began on Thursday morning that some of the drills were due to take place within its 12-nautical-mile sea and air territory, something that has never happened before. A senior ministry official described the potential move as “amounting to a sea and air blockade of Taiwan”.

A People’s Liberation Army Air Force aircraft was seen  circling above the Taiwan Strait, this being the most followed aircraft on plane-tracking site FlightRadar24 for a period this morning.

The site stated it is a Shaanxi KJ-2000, which functions as an airborne early warning and control radar system designed to detect other aircraft, vessels and any incoming objects.

Pelosi’s visit to Taiwan has sparked furore in China, especially after Taiwan president Tsai Ing-wen posed for photos with the U.S speaker of the House Of representatives during their meeting at the Presidential Palace in Taipei. China’s foreign minister described Ms Pelosi’s visit as “manic, irresponsible and highly irrational”.

China’s military announced joint air and sea drills near Taiwan and test launches of conventional missiles in the sea east of Taiwan. According to Chinese state media, three of the six live-fire drills were scheduled to overlap with sea claimed by Taiwanas is its territory. Ahead of the exercises, which are due to begin on Thursday, Taiwan said 27 Chinese warplanes had entered its air defence zone.

Taiwan has never been part of the People’s Republic of China,  and says it is already a sovereign nation with no need to declare independence. It wishes to maintain the safety of the status quo and does not want a conflict, but has said it will defend itself.

Taiwan’s military is closely monitoring the situation in the strait between the island and mainland China.

The ministry added it will “react appropriately” to enemy behaviour to “safeguard national security and sovereignty”.

Taiwan has been on alert while China has been conducting military exercises in response to the 24-hour visit by Ms Pelosi, the most senior American politician to visit the island in 25 years.

China considers the island to be part of its territory and opposes any engagement by Taiwanese officials with foreign governments.

“This is a big deal given a blockade is a legal act of war,” said Indo-Pacific defence policy expert Blake Herzinger. “I think it needs to be signalled to Taiwan that this is not the time to inflame things further.”

This week, Taiwan has also been hit by a series of cyber-attacks though it is not yet clear who was responsible. China, Taiwan’s largest trading partner, also suspended a number imports from the island.

Experts agree that neither the US nor China have the appetite for the tension to escalate to war. According to Justin Bassi, executive director for the Australian Strategic Policy Institute, China’s military exercises will probably be calibrated to avoid escalation from the US.

Herzinger said the US has been very careful to not express support for Taiwan’s independence given that is China’s “red line”.

“In the US engagement with Taiwan, they’re always careful to ensure they find the right balance between supporting Taiwan, but without emboldening Taiwan to do something that would cause a larger conflict,” he said.

Amanda Hsiao, a senior analyst for China at the Crisis Group, said while China’s military escalation is concerning, it is not an unexpected response.

“Beijing is clearly trying to express it’s resolute objections to Pelosi’s visit,” she said “And that means that the military response that it chooses right now has to visibly escalate above military activities that it has previously engaged in around Taiwan, and that baseline is pretty high.

“I think the intention of the military drills is more likely to posture and demonstrate military strength,” she said.

There have been several crises in the Taiwan Strait, most recently in 1995. That incident was known as the Third Strait of Taiwan Crisis and followed the island’s announcement that it would hold its first democratic presidential elections. China flexed its military muscle with months of military drills, including firing missiles 35 miles from Taiwan’s ports.

Major General Chang said he believed the drones were intended to gather intelligence on Taiwan’s security deployment in its outlying islands.
Chinese state media reported the drills are under way hours after suspected drones flew over Taiwan’s territory on Wednesday and hackers targeted the defence ministry’s website.

Earlier on Wednesday, Taiwan scrambled jets to warn away 27 Chinese aircraft in its air defence zone, the island’s defence ministry said, adding that 22 of them crossed the median line separating the island from China