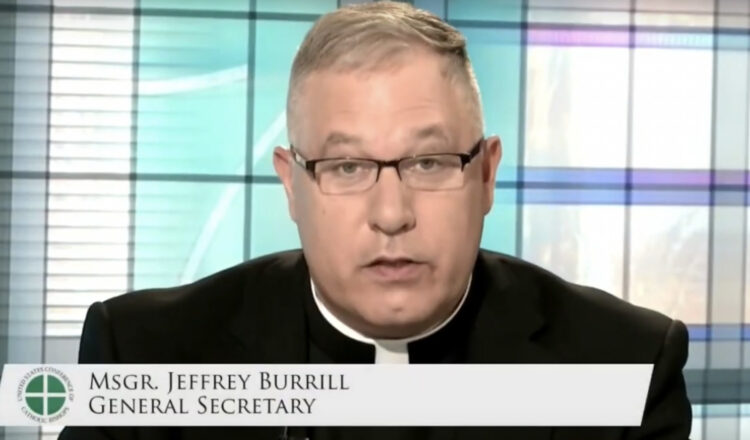 The U.S. Conference of Catholic Bishops (USCCB) has announced the resignation of a top administrator after he was linked to gay bars and apps.

On July 20, it was announced that Jeffrey Burrill had resigned as General Secretary of the Conference because of ‘possible improper behavior.’

The Pillar reported that the priest’s phone had ‘app data signals from the location-based hookup app Grindr on a near-daily basis during parts of 2018, 2019, and 2020 — at both his USCCB office and his USCCB-owned residence.’

Catholic news site The Pillar said it had analyzed data linked to his cellphone which alleged he had used Grindr.

The resignation announcement came from a July 20 memo from Archbishop José Gomez of Los Angeles to the bishops of the United States, and was said to be inevitable because of the Catholic view of homosexuality as a sin.

‘What was shared with us did not include allegations of misconduct with minors. However, in order to avoid becoming a distraction to the operations and ongoing work of the Conference, Monsignor has resigned effective immediately,’ he added.

A day later, The Pillar reported it had obtained information based on the data Grindr collects from its users, and hired an independent firm to analyze it.

‘The data obtained and analyzed by The Pillar conveys mobile app date signals during two 26-week periods, the first in 2018 and the second in 2019 and 2020,’ the publication reported.

‘The data was obtained from a data vendor and authenticated by an independent data consulting firm contracted by The Pillar.’

The Washington Post noted that most information is typically stripped in applications like Grindr but it can contain everything from age, gender and ID. As a result, experts can extrapolate this data, leading to incidents like this one.

Others have questioned the ethics around the initial news report about Burrill. Fr. James Martin, SJ blasted The Pillar for its reporting:

What did the article do? It spied on Msgr. Burrill (more accurately, it using “mined data” from an unnamed source who spied on him) to reveal that, apparently, he had broken his promise of celibacy. The article, which I will not link to, repeatedly conflated homosexuality with pedophilia, all under the guise of a journalistic ‘investigation.’