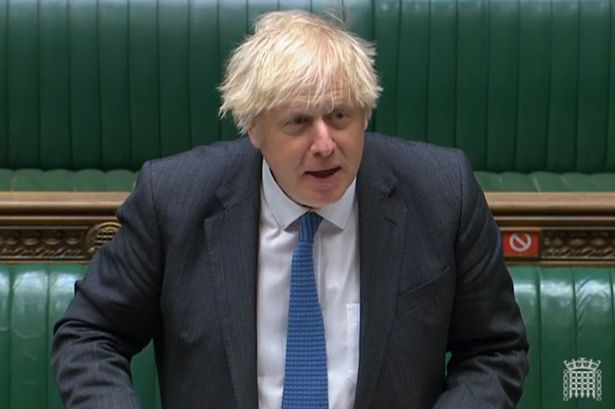 Boris Johnson has  today announced that his government will be completely scrapping plan B from next Wednesday.

Vaccine passports alongside the guidance to work from home and requirement to wear face masks indoors will be scrapped form next week.

The PM said: “The Cabinet concluded that because of the extraordinary booster campaign, together with the way the public have responded to the Plan B measures, we can return to Plan A in England, and allow Plan B regulations to expire.”

Mr Johnson said: “While we must continue to remain cautious, the data is showing that time and again, this government, got the toughest decisions, right.”

Cabinet Ministers met this morning to flesh out the final changes ahead of the PM’s update to MPs.

Covid cases are falling as experts grow increasingly confident the country is over the hump of Omicron.

Mr Johnson is also widely seen as dropping Plan B to sooth lockdown-hating rebels threatening to blow apart his premiership.

A string of other senior Cabinet ministers have also strongly hinted that they expect Plan B to be axed soon on January 26.

Sage member Professor Andrew Hayward said: “It looks like the Omicron variant, by becoming more transmissible, that it’s also become less severe, and we would hope that’s the general direction of travel.”

Johnson insisted omicron is “not a mild disease for everyone”, including the unvaccinated, and advised people to continue washing their hands, letting fresh air in, testing and self-isolating if positive.

The Prime Minister went on: “This week the World Health Organization said that while the global situation remains challenging, the United Kingdom can start to see the light at the end of the tunnel. This is no accident of history.

“Confronted by the nation’s biggest challenge since the Second World War, and the worst pandemic since 1918, any government would get some things wrong – but this Government got the big things right.”

The prime minister  said the Government would set out its “long-term strategy for living with Covid-19”, adding: “Explaining how we hope and intend to protect our liberty and avoid restrictions in future by relying instead on medical advances, especially the vaccines which have already saved so many lives.

The Prime Minister said “The self-isolation regulations expire on March 24, at which point I very much expect not to renew them. Indeed, were the data to allow, I’d like to seek a vote in this House to bring that date forward.

The dramatic news comes after a rocky time in parliament in the past 48 hours, with Mps engaged in an intense shouting match after it was revealed that national lockdown rules brought in last year where based on inaccurate modelling. The row followed revelations that a ‘bring your own booze party’ was organized by the prime ministers secretary amid allegations from his former senior adviser, Dominic Cummings that he was warned not to go ahead with the party.

The prime minister says he was never aware the event was a party and thought it was a work event.