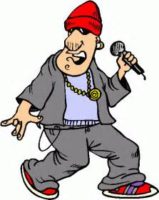 Aspiring UK rappers are lacking in real meaningful talent, the eye of media.com have found.

After listening to a lot of a lot of the rap lyrics sent to us for our Internet radio, the lack of quality talent in the lyrics of many youngsters is pretty apparent.. Most teenagers fill their raps with violent and expletive laden lyrics, in an attempt to copy American rappers who promote such violence. Many rappers can only sing about what they know, and most don’t know any better than to rap about violence, sex, and drugs.

Even raps with good flow are usually ruined by the frequent reference to violence, as they fail to realise the harmful effects such glorification has or can have on society. They themselves are the productive of negative thinking and the destructive lifestyle that accompanies stabbings, killings and robberies. They blindly and ignorantly serve to perpetuate the increasingly deadly culture that gives little value to life, in the name of impressing their peers. Most rappers start to learn their trade at a young age, practicing in their spare time, and having ‘spitting competitions’ in which they sometimes freestyle and put as many words and lyrics together, intended to impress.

However, most raps you will hear from teenagers today are filled with slangs, swear words, and derogatory comments about individuals or girls. There is very little in the way of meaningful and educational lyrics for responsible parents to admire. The presence of talented UK artists like Stormzy, Tine Tempah, Rech 32 and others, has inspired more youths to aspire to become rappers. However, not many teenagers bring intelligent ideas ideas or recommendations to their lyrics.One would be pressed to find leading established rappers in the UK prepared to address the crave for vain and violent lyrics, because most of them have at some point embraced the idea of making lyrical reference to violent episodes or sexually degrading comments. The setting of high standards and good examples has always been a key blueprint to producing impressive individuals from upcoming generations, however, those standards are not often set by those in the position to set them.

Rapping talent itself will never be a rare commodity, but meaningful and truly inspiring talent is hard to find by both known and unknown artists. Rappers devote alot of time and efforts to flaunt their material possessions, as they reflect on the years of hardship that defined their childhood. A case can be made for the celebration of their breakthrough, especially where their newfound wealth extends to their immediate families. Tupac, the American rapper who dominated hip hop in the 90’s, spoke of having to sell drugs to support his mother and siblings. He eventually became a rap star but eventually became a fatal victim of the violence he escaped. He was a clever lyricist, but not very edifying in his message. However, he commanded a huge following in America and the UK, his lyrics still blearing out of the cars of youngsters U.S rapper, Eminem was scathing of his mother who he claims was a prostitute, and most of his lyrics lack wise content. Yet, his extraordinary talent of lyrical flow cannot be denied, and he is regarded as one of the best rappers in the world today..He would have more positive impact on the world’s youth today if he offered much in the way of wisdom but his talent and flow is difficult to match anywhere in the world.