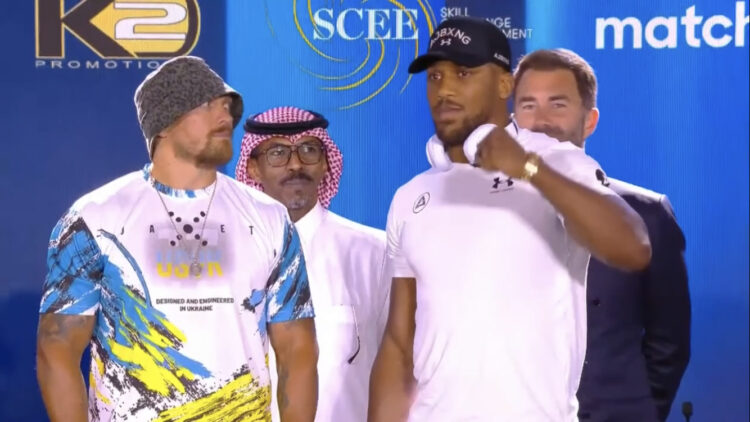 Anthony Joshua insists he will be the come back king when he gets his opportunity to avenge his embarrassing  defeat in the hands of former cruiserweight  world champion, Olegsander Usyk, now the undisputed heavyweight title holder.

Joshua was speaking at the first press conference is Saudi Arabia to promote the summer showdown which he must win to save his face.

“The great thing is I’ve got a second chance. What got me into boxing in the first place – when I was a youngster I got in a little bit of trouble every now and again and I was blessed with a second chance and I found boxing. And I took it with both hands. So if you know me and a lot of my story, you know I’m the comeback king.

“You can put me down. But it’s difficult to keep me down.”

“Definitely the hunger’s still there.”

“I think he fought the wrong fight [before against Usyk] and that’s the past. That happened already. Usyk was the better man. Congratulations to him but come August 20 we’re going to do whatever it takes to win those titles. I know he can do it. He’s the bigger man, the stronger man, he’s got the reach advantage so we’re going to take advantage of all that and come that day I think without a doubt we’re going to have a three-time heavyweight champion of the world.”

“We’ve got to be prepared for everything. Usyk is a great fighter. He’s got skills, he’s got reflexes, he’s got accuracy, he’s got everything. But I think Anthony has all the tools to beat him.”

Usyk,  said, “As we all know we are not in the best condition at the moment back at home [in Ukraine] but we are doing what we have to do. We are doing our job. Together with my team we are working hard to achieve our goals. I never made some very loud and bright speeches. All I did was I just worked hard in my training camp and in my gym. That’s what I’m going to do until the date of the fight and then I will enter the ring and will make you happy with my boxing”

The last time Joshua boxed in Saudi Arabia , he avenged the defeat to Andy Ruiz Jnr in a points win. This time, he will need to put on a major performance to get rid of Usyk and prove his tactics last time were wrong.

One major challenge Joshua will face in the rematch is in discovering what his best performance can actually do against an unbeaten talented man like Usyk, who is maturing into a heavyweight , training very hard, and is aware of  Joshua’s plans. Both men won olympic gold medals at the 2012 London olympics, and will both be desperate to win.

Usyk is seen by many as a blown up cruiserweight, but the reality is that he is now a heavyweight, very fit at his new weight, and a superior boxer to Joshua, but the latter  has a lot  more power in his fists.

The rematch could turn out to be an exciting fight, with the winner potentially moving on to great things, especially if Tyson Fury stays retired.

Sky sports which has invested so much into Joshua’s career would want to see him win back his belts and continue to defend them proudly on their broadcasting channel., more so as Tyson Fury is not prepared to keep testing his credentials as he is widely considered the best of the heavyweights at the moment.