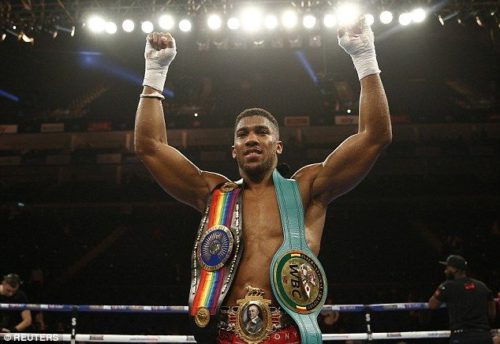 Anthony Joshua is Britain’s Heavyweight done after that epic win against Klitschko.

His decisive win against Klitschko was one of the best wins on British soil.

The brutal stoppage of a man unstoppable for over a decade ,was impressive . He stamped his authority on the division so emphatically in dispatching Klitschko this conclusively.

All surmises that Klitschko ‘ s age could be his undoing were erroneous, for the 41 year old have Joshua his toughest fight ever.

The experienced former reigning champion was conditioned and motivated for the fight, proving a very tough assignment for Joshua.

Brilliantly built Joshua did excellently to change the disaster of losing the fight, before he reversed a script not going perfectly his way, despite a negligible difference between the pair.

In digging deep to thwart the staunch opposition posed by a the live and potent contender in Klitschko, Anthony Joshua made his mark. His performance eclipsed that of Tyson Fury , who best the Ukrainian in 2015 more comfortably, but not as emphatically as Joshua did.

Tyson Fury has reportedly lost 8 stones already in training , as he bids to return to the heavyweight stage.

An opportunity to meet Fury will not present itself immediately for a Fury, but a clash with Joshua is certainly is a fight worth Fury building some momentum in preparation for.