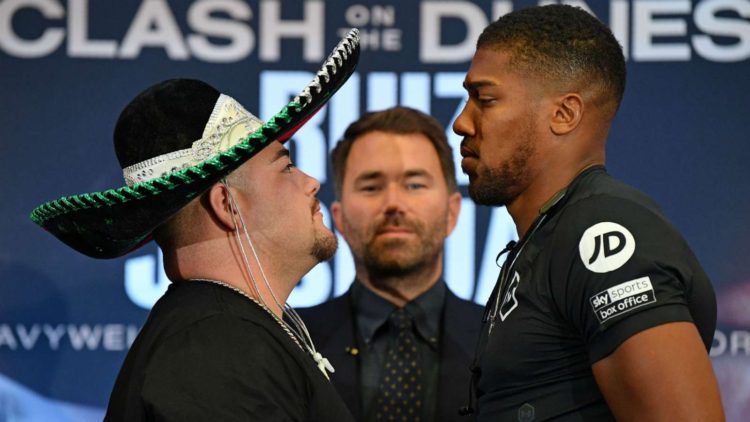 Andy Ruiz says he is a slick pressure fighter who will break Anthony Joshua’s mentality for their December rematch.

Ruiz Jr, who snatched Anthony Joshua’s title from him last June has threatened to use his pressurising style to repeat the defeat that punctured a hole in Joshua’s previously unbeaten record.

Ruiz, who has already settled down a bit in Saudi Arabia and putting the final touches of his preparation in place, has said all along that he is preparing for whatever Joshua brings to the table told Sky Sports that all the pressure is on Anthony Joshua, and that the formerly unbeaten world champion has never seen his style before. He said:

“I’m expecting that [a cautious strategy from Joshua].

“But if he wants to bang, it’s better for me. I love to bang because that’s the fighter I am.

“December 7 we have to pressure, work the body, break him down. Especially his mentality.

“We’ve got to see where he’s at because all the pressure is on him.

“The pressure isn’t one me because I followed my dream, made my dreams come true.

“Of course I want more – I want the legacy of Andy Ruiz Jr.

“People haven’t seen me cut off the ring. I actually break them down even faster when they try to box me around.

“We all have a plan until we get hit, like Mike Tyson would say. I’m pretty sure he will want to box me around.

“One punch can change the fight. That’s what happened on June 1. It might be a little harder than the first fight. I’ve got to show my skills, my talent.

“Especially me staying small. I don’t like he likes fighting [that style]. I don’t think he’s ever fought a short guy that pressures and is pretty slick.

“I felt like I was boxing him around even though I was the shorter guy. I was counter-punching him.

Joshua has promised to redeem himself by avenging the defeat in the same way Lennox Lewis avenged the shock loss in the hands of Hasim Rahman in South Africa in 2001.Joshua recently said that once he beats Ruiz, he wants everyone to bow to him and tell him how great he is.

That will depend on how convincingly he does it. Joshua is the favourite to regain his world title belts when the pair meet in just over a week’s time.