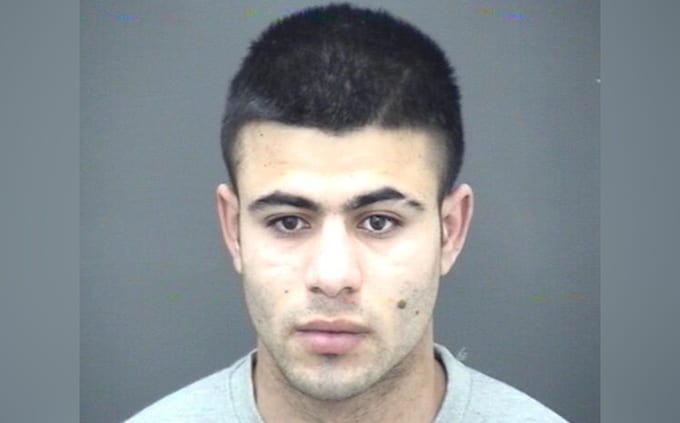 An Afghan asylum seeker and convicted triple killer has been sentenced to life imprisonment with a minimum term of 29 years after murdering an aspiring Royal Marine outside a Subway takeaway shop.

Lawangeen Abdulrahimzai was on the run from murder charges in Serbia when he arrived in the UK but his violent past went undetected and he even managed to dupe officials into believing he was 14 – up to six years younger than his actual age.

According to reports, police were warned seven times that Abdulrahimzai had been carrying a knife before he went on to stab 21-year-old Thomas Roberts in Bournemouth, Dorset, in March last year in an “act of extreme, senseless violence”.

The serial killer was previously convicted of murder in Serbia, where he was handed a 20-year sentence in his absence after two people were shot dead outside a refugee area by a petrol station.

He also previously pleaded guilty to drug-dealing in Italy but was spared jail.

Mr Roberts’ tearful family watched on from the public gallery at Salisbury Crown Court as their victim impact statements were read to the court – before the sentencing judge described the defendant as “at all times the aggressor”.

The fugitive killer was put in foster care on his arrival in the UK despite being convicted and handed a 20-year prison term in his absence for murdering two people with a Kalashnikov assault rifle in Serbia.

On March 12 last year, he had got into a row with Tom’s pal James Medway over an e-scooter.

When Royal Marine hopeful Tom intervened, he was stabbed in the heart and stomach by the “very aggressive” defendant.

Chilling CCTV showed Mr Medway chasing Abdulrahimzai through the city and into a park.

The killer was seen by horrified witnesses running “very fast” through the darkness in the busy town centre.

Tragically, the time between the argument breaking out and Tom being knifed was just 24 seconds.

Jurors were told Abdulrahimzai “revels in violence” and had a “fascination with knives”.

He posed with 10 inch blades on TikTok to get followers from “people out there liking knives”.

The Home Office said it will investigate the “red flags missed” and look at the full circumstances surrounding the case.

Dorset Police said matters concerning Abdulrahimzai’s background had been shared with relevant agencies “to ensure appropriate reviews are carried out and areas for learning are identified”.

The court previously heard that the killer believed he was the younger age because he was told that by an uncle while in Afghanistan.

Sentencing Abdulrahimzai, Judge Paul Dugdale told the court there was “no doubt as to the effect of growing up in the horrors of Afghanistan would have on a young child”.

But the judge said the triple killer was “at all times the aggressor that night and by his behaviour created a situation that led to Thomas Roberts’ death”.

Your momentary act of extreme, senseless violence has left a family with a tragic loss that they will feel for the rest of their lives

He added: “Over and above that, he was looking for trouble.”

Turning to Abdulrahimzai, the judge continued: “You started the conflict, and throughout you were the threatening aggressor.

“In seconds you took the life of a thoroughly decent man with a bright future who was loved greatly by so many people.

“Your momentary act of extreme, senseless violence has left a family with a tragic loss that they will feel for the rest of their lives.”

During the trial in Salisbury, the defendant, who had a “fascination with knives”, admitted stabbing Mr Roberts, who died of his injuries.

The court was told Mr Roberts was acting as the “peacemaker” in the early hours of March 12 2022, after his friend James Medway got into an argument with Abdulrahimzai over an e-scooter.

Abdulrahimzai had claimed the scooter for himself and left it propped against the window of the Subway sandwich shop in Old Christchurch Road.

The confrontation, which lasted only 24 seconds, saw Mr Roberts slap the defendant in the face.

Abdulrahimzai then revealed the knife he had hidden between the two pairs of trousers he was wearing and stabbed Mr Roberts twice before running away into nearby woodland.

He had previously been seen carrying a knife by his foster parent, who had warned him not to, and also been warned by police and social workers of the dangers of carrying a knife.

I miss him every day, every hour, every minute

He had been refused asylum in Norway in December 2019 but arrived in Poole, Dorset, in the same month.

Prior to the judge passing sentence, victim impact statements were read to the court from Mr Roberts’ mother, father, stepfather and partner.

His father, Philip Roberts, was the only one of the four to read his statement to the court, saying: “Tommy was my only son, I always wanted a son to carry on the family line but now he has been taken away from me, leaving a terrible void.

“I miss him every day, every hour, every minute. Now I ask justice is served.”

Mr Roberts’ mother, Dolores Wallace, submitted a victim impact statement which said she was the “proudest mummy in the world”.

The statement, read to the court on her behalf, said: “My heart bleeds, broken-hearted, knowing you are not here any more.

“Since you were born until the day of your death, I will never forget you.

“I’m the proudest mummy in the world. It is just unbelievable that you are gone forever.”

His partner, Gemma Walker, told the court she has been in an “endless cycle of disbelief” since the aspiring Royal Marine was killed.

Her victim impact statement said: “Now there’s nothing but complete and utter sorrow with no reason to keep going.

“The opportunity to have children with the man I love has gone.

“My world, my life and my hopes have been ripped away. I can’t look at photos without sobbing.