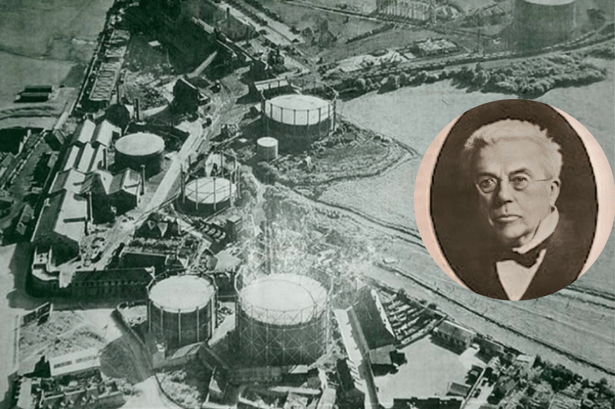 An unsung 19th century Northampton man who supplied gas to countless homes has been commemorated by a local history group who hav restored his tomb , years after his death.

Engineer John Eunson  was one of the most influential people to expand the enterprise of the town alongside to the benefit of its residents, and is being celebrated years after his death by supporters and close associates of some of his descendants.

Last year, Frances Maria Peacock set up a Facebook Group for those interested in the history and heritage of the business.

Ms Peacock told The Eye Of Media.Com:  ”The group was created to allow people share photos, memories and information, as well as promote its great heritage.

We also have A Committee that helps  co-ordinate discovery, research and sustaining our heritage”.

The group, formed in April last year, now has 218 members who have contributed  to building the story about the company and life for its employees.

The Northampton Gas Light Company was set up in 1823 under an Act of Parliament, with a small gasworks built on Mill Lane in 1824, but the late engineer’s lineage have for over a century celebrated his achievements and told his story to their offspring to preserve his memory and carry it on.

Trained under his father, a gas engineer, Eunson was appointed in 1854  to be the manager of the Northampton Gasworks and  subsequently became Consulting Water Engineer, and was associated with the late Mr. Thos. Hawksley, Past-President, in the construction of the Ravensthorpe reservoir.

At the time of his death, he was Managing Director of the Gas Company and Consulting Engineer to the Northampton Corporation.

The first works  were on a meadow called Mill Holme near the river Nene and the canal. The Mill Lane works were enlarged in 1854, and continued to expand until 1887 when additional lands at Baulmsholme, a meadow adjoining the existing works, were purchased.

In 1858 the company was re-incorporated as the Northampton Gaslight Company.

The works were enlarged in 1854 and continued to expand until 1887 when additional lands at Baulmsholme, a meadow adjoining the existing works, were purchased.

Last year, Frances Maria Peacock, set up a Facebook Group for those interested in the history and heritage of the business which now has 216 members who have contributed greatly to enhancing the story about the company.

Local historian Robert Vaughan said: “The first priority of the group was to raise awareness about the last remnant of the company, which is the imposing and attractive former office in St Peter’s Way.

“It was built in 1880 as the head office and considerably extended in 1896 to accommodate the expanding business.

“The offices were saved from probable demolition by purchase by Northampton Borough Council but their expected use for the housing service never materialised.

“Its future remains uncertain, but the group keeps a watching brief for damage and vandalism and tackles regular issues such as graffiti.”

He was originally taken on as a consultant engineer, he became an employee in 1854 for 57 years until his death in 1911.

The driving force of the Eunsons saw the construction of new-design gas holders, which were “safer and less liable to explosion” according to Robert.

The offices are believed to have been designed by Eunson, as well as innovation in production methods and gas cookers. When he arrived, production was 22 million cubic feet a year but at his death, it stood at 700 million.

The works had their own railway network and gradually, as the century progressed, it took over gas companies in other towns such as Weedon, Towcester, Newport Pagnell and Olney.

His son is buried in St Giles’ churchyard in the grave of his maternal grandmother, Frances Revill and later  became the resting place of both John and his wife Frances.

The group intend to continue Eunson’s legacy for generations to come.