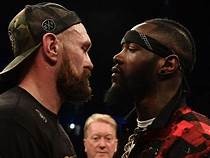 WBC heavyweight champion, Deontey Wilder has warned Tyson Fury to be ready for the deep cuts to his eyes sustained in his last fight against Otto Wallin to reopen when they meet for their rematch  in 2020. Fury won a tough unanimous decision against Wallin after sustaining deep cuts on his left eye that caused the ringside doctor to examine him twice during the fight and decide whether he should be allowed to continue or not.

“I thought he was going to get a stoppage. It looked like it was three inches wide and two inches deep.
“That’s the worst cut besides the [Vitali] Klitschko and Lennox [Lewis] fight. That was the worst cut I’ve seen in my life.”

“No matter what he does, when he fights me, it [the cut] is going to open right back up. I’m going to pop it right back open.
“He can get plastic surgery, duck tape or staples, super glue or hot glue, cement glue. S***, he can go get some of that flex glue. It ain’t even going to matter.”