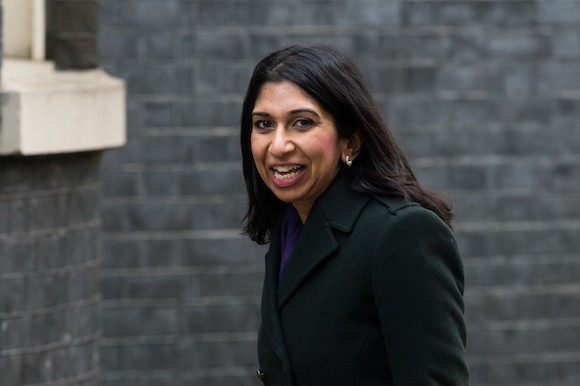 The attorney general’s office said previous advice had changed because the agreement between the UK and EU was causing social unrest- an announcement that is itself causing unrest among EU officials.

“Unilateral action will make all of this worse… It will result in legal action. It will result potentially in counter measures” from the EU, Simon Coveney told journalists in Belfast when asked about British threats to make unilateral changes to the protocol, part of Britain’s EU withdrawal agreement.

Meanwhile, Britain’s retail industry warned on Wednesday that unilateral action by Britain to overrule post-Brexit rules agreed with the European Union for trade in Northern Ireland could harm all UK consumers if there was retaliatory action by the E.

Andrew Opie, director of food and sustainability at trade body the British Retail Consortium (BRC), told lawmakers the government needed to remember that 80% of the UK’s food imports come from the EU.

“Our concerns would actually be about the wider impact potentially to all consumers in the UK if there was any kind of retaliatory action from the EU,” Opie said in evidence to a committee in the upper house of parliament looking at the impact of the Northern Ireland Protocol.

“By that I mean if it affected the actual (UK-EU) trade deal itself and we saw some consequences…which added costs to our food supply chain. Then that would have a serious impact potentially on consumers, not just in Northern Ireland but across the UK.

The Northern Ireland Protocol has been a contentious element of the Brexit treaty, signed by the UK and the EU in December 2020, and has even led to the intervention of U.S president, Joe Biden.

The arrangements were designed to avoid the need for a hard border with the Irish Republic – which remains part of the EU – and customs checks on that frontier post Brexit. It was also expected  to avoid  any threat to  peace in Northern Ireland ushered in by the Good Friday Agreement. It is proven tougher for both sides to agree on progress.

David McAllister, a German centre-right MEP who chairs the European parliament’s UK coordination group, said the EU was united against renegotiating the protocol.

“The protocol was signed and ratified by both sides. Nobody here in Brussels is interested in starting these new complicated discussions and political fights,” he said.

However, British Foreign Secretary , Liz Truss,  has warned  her EU counterpart, Maroš Šefčovič, in a phone call, that unless the EU demonstrated  the “requisite flexibility” in talks over the trading arrangements she would have “no choice but to act”.

It was the first time the pair had spoken since it was revealed the UK was considering tabling draft legislation to override part of the special Brexit trading arrangements for Northern Ireland.

Unionists argue the Protocol created a border in the Irish Sea instead, causing Northern Ireland to be treated differently from the rest of the UK.

The update  could allow scrapping checks on goods going from Britain to Northern Ireland, presenting a huge problem for unionists.

The EU has threatened the introduction of trade sanctions as part of retaliatory measures int he absence of compliance with the former arrangement, complicating the already fragile relationship between the EU and the Uk.

No final decisions have yet been made by UK ministers on whether to move ahead with scrapping parts of the protocol, including legislation.

The Foreign Office said she had told Mr Sefcovic  that the UK’s “overriding priority is to protect peace and stability in Northern Ireland”.

Ms Truss described the protocol as the greatest obstacle to forming a new power-sharing executive in Northern Ireland.

The Northern Ireland Protocol has been a contentious element of the Brexit treaty, signed by the UK and the EU in December 2020,

The arrangements were designed to avoid the need for a hard border with the Irish Republic – which remains part of the EU – and customs checks on that frontier post Brexit.

Many believed that could have threatened the peace in Northern Ireland ushered in by the Good Friday Agreement. But unionists argue the Protocol created a border in the Irish Sea instead, causing Northern Ireland to be treated differently from the rest of the UK.

Mr Sefcovic has previously called on the UK to “dial down the rhetoric” and to “be honest” about what it committed to when it signed up to the protocol.

On Wednesday,  prime minister, Boris Johnson, said the Good Friday Agreement, which set up a cross-community power-sharing government as a way of ending decades of violence. was more important than the protocol.

He dismissed suggestions of retaliation by the EU as “crazy”, saying there was no need for “drama”.

Mr Johnson said the protocol was not commanding cross-community support and “we need to sort it out”.

Article 16 is part of the Northern Ireland Protocol and allows either party to suspend parts of the deal if it’s causing serious problems.