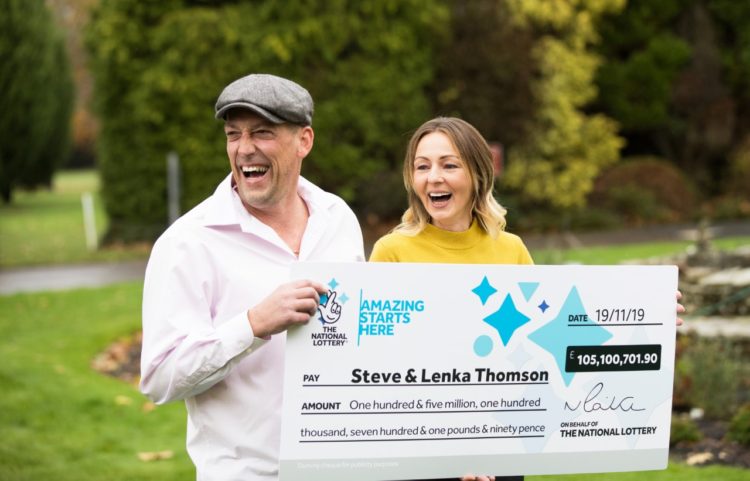 The hardworking couple hit their mega big jackpot  on the 25th birthday of The National Lottery (19 November) , making them the ninth biggest winners ever in the country. The couple who have three school-age children, are gobsmacked by the win and are still coming to terms with banking their life-changing win.

Steve Thomson , 42,  discovered the win while waiting to be picked up for work on Friday (22 November). The self-employed builder only checked his ticket as his work partner was running late. He wasn’t aware a UK winner had banked the giant jackpot when he scanned down his three lines comparing them to the winning numbers.

Steve said, “I am not sure I even looked at the first two lines, the third one just jumped out and I could instantly tell they all matched. I started shaking a lot. I knew it was a really big win but didn’t know what to do. I went out to my van, walked back in, thought about knocking on a neighbour’s door, went back to the van . I think I was on the verge of having a heart attack.”

Steve decided that he had to tell his wife and quickly drove to the local shop where Lenka , 41, works. She said, “As soon as he walked in I thought something was wrong and he said he had to talk to me immediately.”

The couple sat in Steve’s works van and he shakily handed Lenka the ticket. She checked it and then scanned it using the National Lottery App and was overjoyed to see what she thought was a £105,000 win. Immediately asking if they could go away somewhere for Christmas, Steve had to point out the win was far, far more than that.

Amazingly, the couple then both went off to work for the day promising to sort it all out later that day.  Steve put the winning ticket back in his wallet. He proceeded to re-painting a ceiling he had accidentally put his foot through while recently insulating a loft. Lenka finished work at lunchtime and the couple agreed that they should both call their mums to share the news.

Both mothers maintained a cool head when informed of the big win . Lenka’s mum in Kysuce in Slovakia saying that she ‘would believe it when she sees it.’

The pair endured a  long weekend awaiting confirmation of the news , with both Steve and Lenka admitting it has been tough to sleep and keep the news quiet. Lenka has even found herself awake and washing up in the middle of the night! They have told their family and close friends but want to fully enjoy their win by sharing the news with everyone.

Steve said, “It would be so difficult to live a lie and not tell anyone about the win, especially with the fact we can both stop working and move house.”

The  conscientious builder has promised not to leave any of his clients or his partner in the lurch. He said, “I would have got all my jobs done by Christmas if this hadn’t happened! Once I am over the shock I will need to keep doing something, I am not the type just to sit still. My business partner knows that if he needs a hand I’ll be there.”

The couple, who have been together for 17 years, met while working at a local leisure complex in Selsey. Lenka, who is from Slovakia, was a student studying in the UK. Both say that this win is all about family.

Steve said, “To be able to give our children a bedroom each is a big thing, so we have been looking for a house. We will stay locally but somewhere with some space. I would like to build our own place eventually but we’ve been looking at houses online for now. We will also support our families by buying them houses.

“The children haven’t asked for much at all. His own room will be everything to our eldest son, who is 15. Our other son did ask for a Tesla but he is only 10. And our daughter, who is 8, has her sights firmly set on a pink iPhone.”

Lenka is also looking forward to the life-changing effect of the win. “Our annual holiday has always been to see my family in Slovakia and each year we start saving for the next one as soon as we come home. Not only can I treat my family and see them more often, but we can also look to have other holidays, perhaps somewhere hot with a beach.”

Steve bought his winning ticket from East Beach PO and Candy Store in Selsey and the winning EuroMillions numbers from the draw on Tuesday 19 November, 2019 were 08, 10, 15, 30, 42 and the Lucky Stars numbers were 04 and 06.