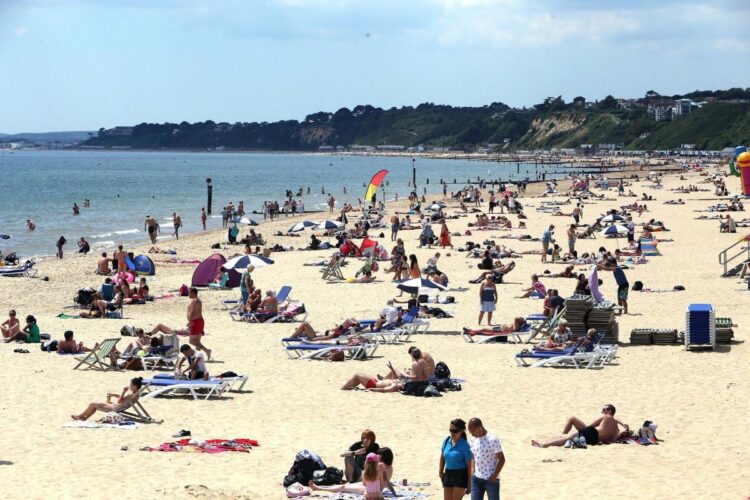 Beaches in England must be shut down if Britain is really serious about defeating the coronavirus. Leaving it to the discretion of members of the public is not good enough, and gives the impression the threat of the virus is not as serious as purported to be.

Featuring scenes on our newspapers  of excessive congregating on our beaches in view of summer enjoyment is futile if no action can be taken to stop it.
We are now only a day away from the possible last leg of the three months of lockdown, but according to the government, it depends….

If there is a spike of the virus at any time, back we go to the restrictive Covid—19 rules, and possibly, even total lockdown—God forbid it. So, fingers crossed, with bated breath. It’s happening already in some parts of the world, America in particular.

It’s chaos in most States of America, at the moment. However, they have wasted no time in shutting down their beaches instead of negotiating with self centred human beings whose primary c0ncern is to enjoy the heat.

On Thursday a police chief was laughably urging visitors to Brighton Beach to act responsibly this weekend.

There appears to be a potential fierce return of the viral beast, where people might have thought it over and done with. True or false, Britain is waiting to see what may be the outcome of recent, wide neglect of physical social distancing from Black Life Matters protesters and fun lovers at multiple beaches in the Uk, particularly Bournemouth beach.

Overcrowding in Brighton Beach       Image: The Eye Of Media

Notwithstanding, the government’s gradual relaxing of social distancing in recent weeks has not seemed sufficiently convincing to make sense. From two household bubbles for instance, to over night stays with physical restrictions, leaving too much to discretion. Currently, distancing is reduced to one meter. One might as well not bother.

Easing the lockdown and social distancing rules has inescapably been very challenging to the government. The balancing act to save the NHS and the British public from Covid -19 on one hand, and saving the ailing economy from total collapse…as well as striving to soothe the longing of the people for their freedom to get physically close to whom they would and even go out.

Nonetheless, if the virus is still at large, then our policies have to reflect it to some reasonable degree. As pubs open tomorrow, this cannot be seen as a license for people to congregate in vast numbers on beaches. The balancing act the government is trying to achieve must be clear.

Allowing large numbers of people to assemble on beaches on the one hand, while instructing social distancing on the other hand, does not work. It spells a contradiction that members of the public will interpret as they see fit.

At times, there has been a sense of the conflicting pressures on Boris Johnson. So, the recent influx of great crowds lounging about and sunbathing on the beach at Bournemouth presented the perfect picture of the hugely shaky decisions to hold up the balancing act; social distancing was recklessly flung out of the window. It is hoped the virus is not incubating secretly and waiting to explode.

Many were stunned that the government expressed disappointment at the unrestrained social movements at several  Uk beaches. It should have been expected, after the massive protests over the murder of George Floyd in America.

British people spontaneously treated the lockdown rules with careless abandon and poured out onto the streets, in protest, mixing freely day after day, for the cause of Black Life Matters. That was enough for the UK government to go by.

Understandably, the government might have felt helpless to enforce the restrictions over an extremely sensitive racial matter that had erupted across the world. The potential toll on lives from Covid-19 was simply still hanging in the air, at the time of the Bournemouth beach episode.

The  easing of the lockdown schedule could have therefore been suspended and pushed back, as an emergency response. Of course, people might have felt frustrated, but not too surprised.

The Prime Minister’s stern announcement after Bournemouth, threatening not to hesitate to reverse the progress of the lockdown process was a reflection of how serious things were getting.However, human beings need more of action than words.

Already,  theories had long been flying around about Covid—19 in the UK. The numbers of deaths announced were increasingly being queried on the grounds that deaths from causes other than coronavirus had not been appropriately separated

Researchers from The Eye Of Media.Com were questioning hospitals and medical practitioners wherever they could find them. Other media organisations must have been doing the same.

One observable conclusion was that there was no documented stats revealing how serious the condition of patients with underlying issues were at the time they contrived Covid-19 which killed them. This could not change the reality of Covid-19, but it also meant we could not properly assess it independently of other pre-exisiting ailments of patients.

Although the daily government briefing offered opportunities for questions from the media, it would appear that a concluding session was taking place just before Bournemouth. It seemed somewhat hazy.

The management of the pandemic has been an extraordinary phenomenon everywhere across the globe. Britain is essentially a law abiding nation, but one that puts premium on her rights, on propriety and good fun. The public has to a great extent, respected the social distancing rules.

It has however proved too difficult for many to continue observing the social distancing rules which have sometimes appeared confusing or even ridiculous. Some people complained of feeling silly. The easiest thing has been to simply ignore the instructions.

Also, for too long, the case for the social distancing and lockdown had been consistently undermined.

Former Supreme Court judge, Lord Sumption, attacked the legality of the lockdown rules, seemingly giving license to those who would choose, to disobey it. The BBC aired his assertions with little counter arguments.

Matters surrounding compliance with the lockdown became further complicated after the Prime Minister’s top Adviser, Dominic Cummings made the headlines for breaking the rules, hereby failing to set a good example. The rise of dissenting voices in Parliament, and not less, among journalists demanded Cummings’ resignation, but the Prime Minister allowed him hold on to his job.

In his reaction to Cummings’ unpopular behaviour, Piers Morgan, co-presenter of the Talk Show, Good Morning Britain mercilessly condemned the government  and went as far as threatening openly to disobey the rules.

Morgan had previously attacked Matt Hancock, the Home Secretary for misgivings about the government’s preparedness for the pandemic. He also ridiculed and humiliated a couple of female politicians for not appearing to meet the required standards of his questioning.

All of this was taking place amidst widely publicised criticisms that Boris Johnson’s response to the Coronavirus had been unduly delayed, thereby causing the loss of thousands of lives.

It has been a three months of nightmarish darkness in this country, with the toll of multiple tens of thousands of lost lives, amongst the highest figures in the world. Our thoughts and prayers go to the many whose hearts have been bruised from the strange disease. Let it be a dream that never returns regardless.