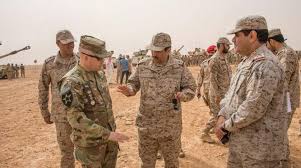 The Pentagon  say  the decision  affects infantry personnel and all other Saudi military training  other than classroom lessons.  English-language classes will continue. It comes after Mohammed Alshamrani, a 21-year-old lieutenant in the Saudi Royal Air Force opened fire in a classroom at Pensacola Naval Air Station in Florida on Friday, killing three American sailors and wounding eight other people before being shot dead by police.

A senior Pentagon official said the move was intended to allow for a broader review of security procedures which would eventually apply to all of some 5,000 international military students in the US. The safety stand-down only applied to the some 850 visiting students from Saudi Arabia.

The FBI has said it believes Alshamrani acted alone before he was fatally shot by a deputy sheriff.

“I don’t have any evidence to suggest that there is a larger ring or larger conspiracy,” a military official said.The shootings have again raised questions about the US military relationship with Saudi Arabia, which has come under heightened scrutiny in Congress over the war in Yemen and Saudi Arabia’s killing of Washington Post columnist Jamal Khashoggi last year.

“Given the traumatic events, we feel it is best to keep the Royal Saudi Air Force students off the flying schedule for a short time,” Genualdi said.

Alshamrani was on the base as part of a Navy training programme designed to foster links with foreign allies. He had started training in the US in 2017 and had been in the Pensacola area for the past 18 months.

A group that tracks online extremism has said Alshamrani appeared to have posted criticism of US wars in predominantly Muslim countries and quoted slain al-Qaeda leader Osama bin Laden on Twitter hours before the shooting spree. He is reported to have posted a manifesto denouncing the U.S as “a nation of evil”.

White House National Security Advisor Robert O’Brien said the FBI investigation was continuing but that, in his opinion, “it appears to be a terrorist attack”. Deputy defence secretary David Norquist ordered a comprehensive review to be completed within 10 days of policies for screening foreign students.

Pentagon officials said the security study was being done with the cooperation of the Saudi government.

Alshamrani was armed with a lawfully purchased 9mm handgun. The FBI said on Tuesday he obtained the weapon through an authorised gun seller in Florida in July, through a loophole in federal gun laws that allows foreign nationals – usually unable to buy firearms – to have a hunting license.

The shooting struck a nerve in the US with echoes of the September 11, 2001, attacks, in which Saudi citizens accounted for 15 of the 19 hijackers that flew airliners into the World Trade Center and the Pentagon.

Saudi Arabia remains one of the closest US allies in the Middle East, and President Donald Trump has cultivated its controversial de facto ruler, Crown Prince Mohammed bin Salman (MBS).

Saudi Arabia’s King Salman bin Abdulaziz denounced Friday’s shooting as a “heinous crime” and said the gunman “does not represent the Saudi people”.