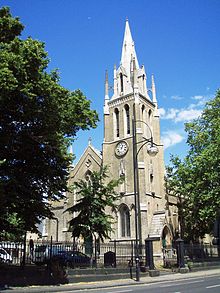 Three churches across east London have been targeted in a series of arson attacks, Church leaders have said.- St John’s church in Stratford, St Matthew’s in West Ham and Cann Hall Road Baptist Church in Leytonstone

The motive of the attack is not yet established but could raise alarm amongst churchgoers in East London. No deaths have been reported as of yet.  John Edney, church secretary of Cann Hall Road Baptist Church in Leytonstone, the church was on fire twice.  The church’s notice board is now “completely destroyed” and its main doors are “badly scarred with burn marks”, he said.

Officials of the various churches are said to be deeply worried as to reason for the attack, as nobody has claimed responsibility for it. The attacks appear to have been co-ordinated in what in what is being treated as a threatening sign

Describing  what happened, he said: “Yesterday (Wednesday, June 19) around 10am, a small fire was started – by person(s) unknown against the church hall door.

“The smell of smoke from the hall lobby alerted those inside who on opening the door discovered some blazing material and promptly extinguished it. The police were informed and an officer called later in the morning.

“Around 10pm, again on June 19, the fire brigade was called to the church upon reports that part of the main church doors was alight together with a small free-standing notice board which stood against one of the doors.

“The board was completely destroyed as well as paintwork on two doors which are badly scarred with burn marks.”

“We are asking people in our parishes to remain vigilant and to report any suspicious activity to the police.”  The Met Police said it was informed and attended both incidents. Investigations into all the attacks continue.