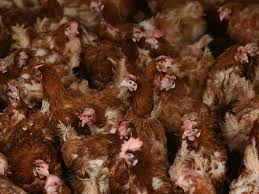 A Suffolk firm has revealed cases of bird flu, the British Government has said.All 27,000 birds at the commercial farm will be culled after a number were found to have the H5 strain of avian flu, The Department for Environment, Food and Rural Affairs confirmed  on Tuesday that all 27,000 birds will be called after  several cases

The strain has been identified as “low pathogenic avian flu”. Public Health England say the risk to public health is very low and the Food Standards Agency has said food safety is not at risk. However, there is no denying that the virus can be infectious and contracted from the air or through physical contact with objects A one-kilometre exclusion zone has been set up around the farm to limit the risk of the disease spreading.

Symptoms include Conjunctivitis, stomach pain, bleeding from the nose, Diarrhoea, stomach or chest pains and a few others

ALERT
Poultry farmers will be on alert for signs of bird flu but the British public are being urged not to be alarmed as their Christmas turkey will not be affected. The British Poultry Council (BPC) said it was working closely with Defra to monitor and limit the risk of the disease spreading.

BPC chief executive Richard Griffiths said: “The health of our birds remains the priority for BPC member businesses up and down the country.

“I would like to urge all commercial and non-commercial producers to maintain effective biosecurity on their premises, remain alert for any signs and report suspected disease immediately.”

A BPC spokeswoman added: “There is no link whatsoever to the Christmas turkey market. It is unaffected by this case.

“This is a specific farm in Suffolk and the birds are being culled.”

Chief Veterinary Officer Christine Middlemiss said: “Bird keepers should remain alert for any signs of disease, report suspected disease immediately and ensure they are maintaining good biosecurity on their premises.

“We are urgently looking for any evidence of disease spread associated with this strain to control and eliminate it.”

“As a precaution, we are offering public health advice and antivirals to those who had contact with the affected birds, as is standard practice.”